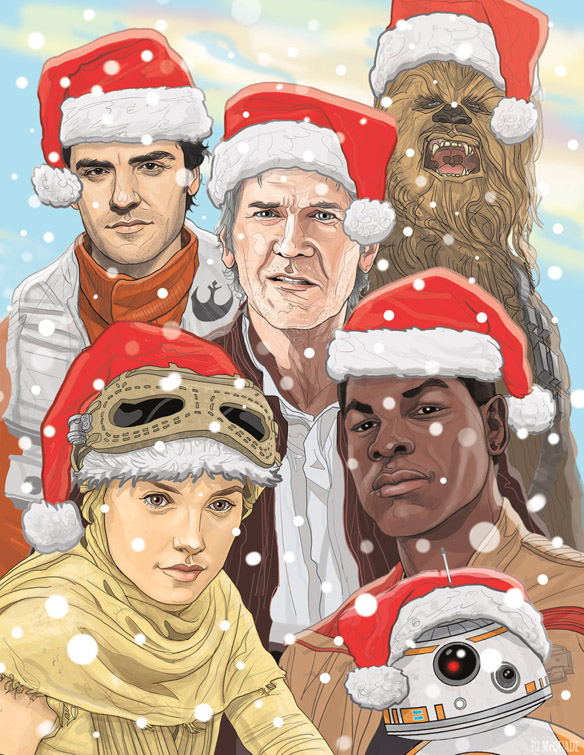 The Force (of Christmas) will be strong with you when you send out this cool Star Wars The Force Awakens Christmas Card, featuring the already-classic characters from the newest movie in the Star Wars franchise.

Poe Dameron, Han Solo, Chewbacca, Rey, Finn, and BB-8 take a little break from fighting the First Order to don Christmas hats and spend some time frolicking in the snow.

Worried about Luke Skywalker still being MIA? Relax and let the Force flow through you… and open the card because you’ll see wise and bearded Luke on the inside… along with Kylo Ren, who can probably be viewed as the Star Wars version of the Grinch. Sadly, General Leia was too busy with military duties to take part in the holiday games.

Included with the card is a white envelope stamped with, “A long time ago, on a holiday far, far away…” in red on the back flap.

If you happen to have more than one person you’d like to send this card to, it’s also available in packs of 5, 10, and 20.

The Star Wars The Force Awakens Christmas Card is available for $5 at CastleMcQuade’s Etsy store.

After thirty years, the Dark Side has a new face, which is captured on the Star Wars The Force Awakens Kylo Ren Sixth-Scale Figure. Standing 13-inches tall and wielding his eye-catching crossguard lightsaber, Kylo Ren is ready to do battle in the name of the […]

Give in to the Dark Side with the Star Wars The Force Awakens Black Series Kylo Ren Helmet, and revel in the darkness because you are immune to the light. By now, everybody knows one of the Big Bads in Star Wars: The Force Awakens […]

It figures, doesn’t it? You feel the Dark Side calling you but all you have are jeans and t-shirts. What’s an aspiring knight of Ren to do? Let the Star Wars :The Force Awakens Kylo Ren Costume Ensemble with Helmet awaken your Dark Side fashion. […]

Have you felt it? The Force is strong with the Star Wars The Force Awakens Kylo Ren Mural. Maybe he’s just a Darth Vader fanboy but Kylo Ren is an intimidating figure on this 5’7″W x 4’3″H vinyl wall decal, ready to attack, his unique […]

Everyone will think you’ve joined the Knights of Ren when they see you driving around with the Star Wars The Force Awakens Kylo Ren Window Wrap Passenger Series Car Decal. Kylo Ren has Vader’s helmet, a plan, and a funky lightsaber. What he doesn’t have […]

Get your kid this Star Wars Force Awakens Kylo Ren Poster Lunch Box. After all, you had one when you were a kid. And so another generation comes to love Star Wars. This lunchbox features BB-8, C3PO, Captain Phasma, Chewbacca, Finn, Kylo Ren, R2-D2, Rey, […]