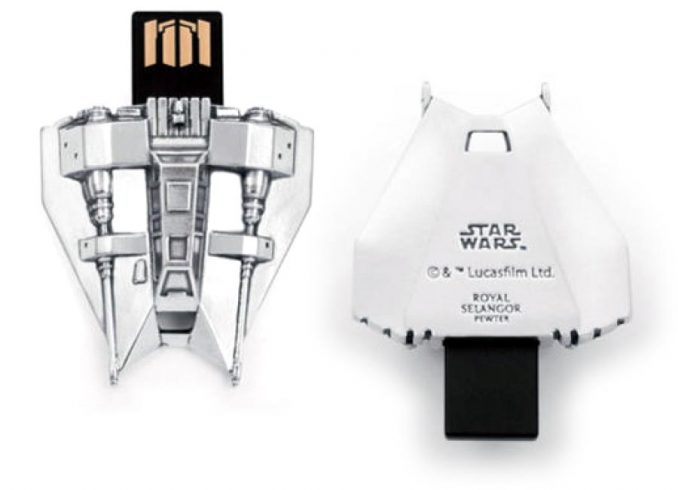 Just like the Royal Selangor Millennium Falcon Flash Drive, this Star Wars Snowspeeder Pewter Flash Drive is a functional work of art. It’s a detailed model of the modified T-47 airspeeders that became snowspeeders in the rebel base on the snowy planet Hoth, yet also a fully-functioning 16GB USB flash drive.

While snowspeeders may not be heavily armed compared to the mighty AT-AT walkers they have to go up against, they can be surprisingly effective with something as simple as a tow cable. Similarly, 16GB may not be a top stat for flash drives these days, but this baby would like be your favorite in your collection of USB drives.

Despite its modest armaments, the diminutive 2-person craft’s rudimentary tow cable proves effective against the gigantic AT-AT walkers at the Battle of Hoth.

This Snowspeeder Pewter Flash Drive is $99 at RoyalSelangor.com.

Our favorite Star Wars R2 unit is back and ready to serve you.  The R2-D2 USB Flash Drive comes in 4GB, 8GB and 16GB for some serious portable storage capacity.  This R2-D2 makes for a great desk ornament when he’s not working and just pop […]