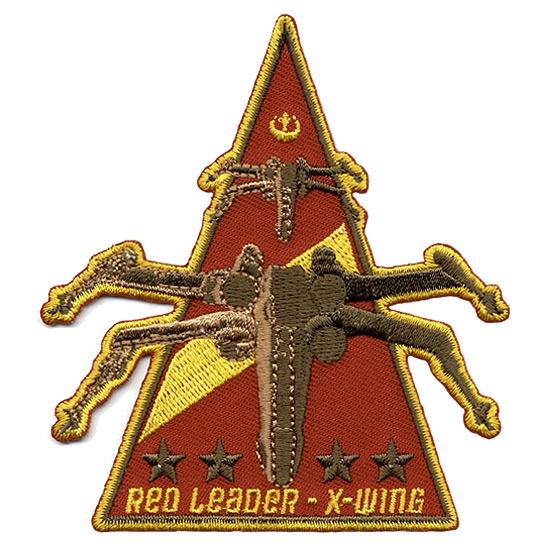 If you have the Marc Ecko Star Wars X Wing Pilot Jacket, you need to adorn it with this Star Wars Red Leader Patch. You don’t want to look like a plain old ordinary x-wing pilot, do you?

There were numerous commanders of the Red Squadron over the history of Star Wars, with Luke Skywalker himself being Red Leader during the Battle of the Ison Corridor. During the assault on the original Death Star in “A New Hope,” Red Leader Garven Dreis was killed by Darth Vader. Wedge Antilles, Red Leader during the attack on the second Death Star in Return of the Jedi, not only survived the mission, but along with General Lando Calrissian, helped destroy the station by firing on the hypermatter reactor core.

The Red Leader of Red Squadron was Luke’s dear ol buddy Wedge! Later, however, Red Squadron was renamed Rogue Squadron and was comprised of the best pilots the Rebel Alliance had to offer! The prime requirement for joining this illustrious squadron is the ability to bullseye a whomp-rat or have this fantastic 3.75 inch high by 3.5 inches wide Star Wars Red Leader Patch!

Get ready to go rogue and join the Rebellion with the Star Wars Rogue One Born to Rebel Art Prints. Artist Orlando Arocena has created more incredible vector art, this time providing two distinct looks for the Rebels in Rogue One: A Star Wars Story. […]

Rogue Squadron is the Rebel’s best fighter unit and they look good doing their job thanks to their uniforms. Now you can look fashionable and like you are ready to pilot an X-Wing at the same time with this Rogue Squadron Ladies Tunic Top. Feel […]

It just got a bit easier for Star Wars fans who still haven’t been able to decide which side to join. You can now wear the imperial logo belt buckle around your waist and at the same time wear these new rebel pilot headphones on […]

Mosquitoes can be the bane of your existence, and they can be quite bothersome, especially in areas that have a larger population of insects. Mosquitoes can also be carriers of diseases, and it’s important to avoid getting bitten by them. The Kite Patch renders people […]

Planning to go on an out of town trip soon? Aside from stowing away your valuables in the Spy Bolt Covert Secret Container and carrying along the iPhone Portable Amplifier Horn in your suitcase, make some space for the Ila Portable Door Alarm Wedge to […]

The better the computer graphics and screen resolutions gets, the more interesting it is to see pixelated designs – don’t you think?

By now you’ve seen the cool Star Wars Jackets by Marc Ecko: Chewbacca, Imperial TIE Fighter, X-Wing Pilot and AT-AT Themed. If you’ve been holding out for that special droid, the wait is over. The Star Wars R2-D2 Jacket by Marc Ecko will have R2-D2 […]