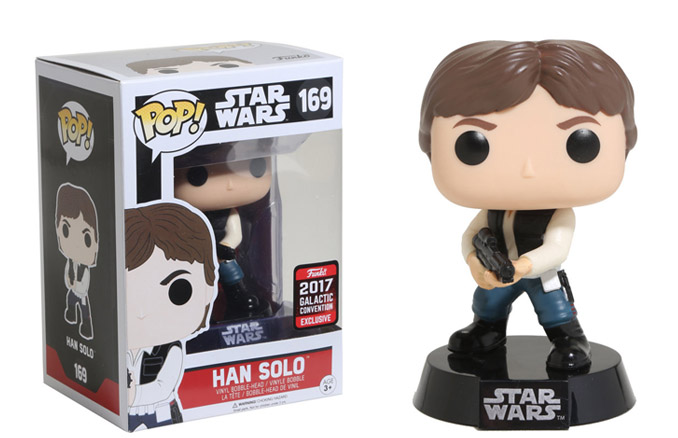 Celebrate the movie that started it all with the Star Wars Pop! Han Solo 2017 Galactic Convention Exclusive Vinyl Bobble-Head.

The captain of the Millennium Falcon has had a few different looks while battling the Empire and First Order but nothing beats that classic black vest over white shirt. It’s simple and stylish at the same time.

If this 3 3/4-inch tall figure sort of looks familiar, you might be thinking of the Star Wars Han Solo Pop! Vinyl Figure Bobble Head but that one features Han wielding his regular blaster pistol with one hand, while this bit of firepower requires two hands. Also, this figure has way better hair.

Available for $15 at Hot Topic.

You love him? I know. That’s why Rout.com lets you know about great deals on Han Solo merchandise.

Chewie, the Star Wars Han Solo Pop! Vinyl Figure Bobble Head is home… or at least it will be as soon as you buy it. Standing 3 3/4-inches tall and dressed in Han’s outfit from Star Wars: A New Hope, this bobble head is ready […]

The smuggler who became a Rebel hero is ready to shoot first with the Star Wars Han Solo Bobble Head. Standing 7-inches tall and based on Harrison Ford’s portrayal of the character in Star Wars: A New Hope, Solo stands with his trusty blaster in […]