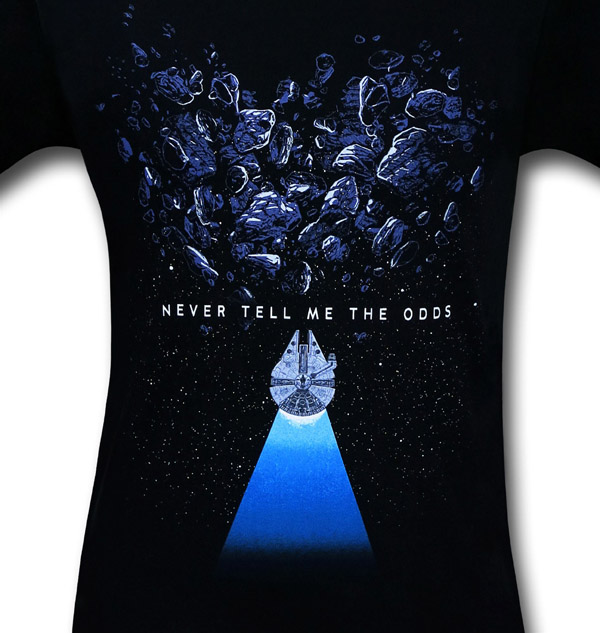 Han Solo never likes to hear what his chances of survival are because the reality of almost-certain death could throw off his mojo… or make him more determined than ever to come out on top. The Star Wars Never Tell Me the Odds T-Shirt lets everyone know you share the same devil-may-care philosophy.

Whether you’re flying into an asteroid belt at maximum speed or asking for a raise someplace you’ve never even worked, it’s comforting to go in blind, unaware of how epically you could fail… although you should have a good idea with the asking for a raise scenario.

The 100% cotton t-shirt features the Millennium Falcon flying straight towards a dense field of asteroids, with the words, “Never Tell Me The Odds,” separating the ship from the giant floating rocks.

Be chill like a Corellian smuggler with the Star Wars Never Tell Me the Odds T-Shirt for $21.99 at SuperHeroStuff.com.

Everyone would love to have their own wine fridge or cave, but those are hard to come by. No worries because wine fridges and cellars aren’t the only way to chill wine. For those who don’t have the cash or accommodations for fridges or cellars, Skybar Wine Chill […]

Star Wars Han Solo Ahead of the Odds Art Print

The odds are stacked against Solo and Chewbacca on the Star Wars Han Solo Ahead of the Odds Art Print, but the smuggler who became a hero who became a smuggler prefers it that way. Measuring 17″ x 22″ and printed on canvas, this eye-catching […]

Live in a windowless room? Up all night, but like to pretend it is daytime outside? You need the Bright Blind by Makoto Hirahara. This ingenious design simulates a window by using a bright electroluminescent sheet behind a blind. Just hang it on the wall, […]

Fans can appreciate this Tetris Fail Blanket no matter how good or bad they are at playing the game. Hopefully no one is this bad though. That is the worst Tetris Fail I have ever seen. This blanket is a great way to celebrate your […]

The Nixon Sentry SS SW Watch – Millennium Falcon Gunmetal is a seriously good looking watch. The dial looks like the Millennium Falcon going into hyperdrive. The back is engraved with the Falcon’s cockpit windows and Han Solo’s quote “Never tell me the odds”. It […]