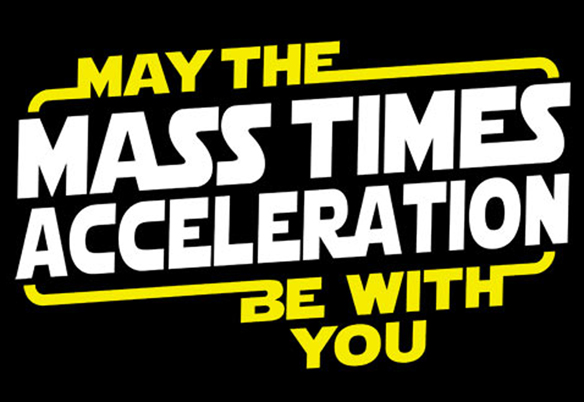 Nothing says geek like mashing up two geektastic elements that most people wouldn’t consider mixing together, which makes the Star Wars May The Mass x Acceleration T-Shirt one of the most awesomely geeky items in the entire universe.

Star Wars fans might come up and tell you that you’re doing it wrong if they don’t see the brilliance in this text-based joke but Star Wars fans that also know a bit about physics will be rolling on the floor because they know Mass x Acceleration is the formula for determining Force.

Is it a long way to go just to say May the Force Be With You? Sure, but the trip is totally worth it.

The image is available on black t-shirts for both men and women, and you can also get it on a black hoodie, but kids will have to settle for a Navy Blue t-shirt if they want to show devotion to Star Wars because the Goth look isn’t available for them.

The Star Wars May The Mass x Acceleration T-Shirt is available for $19.95 at SnorgTees.