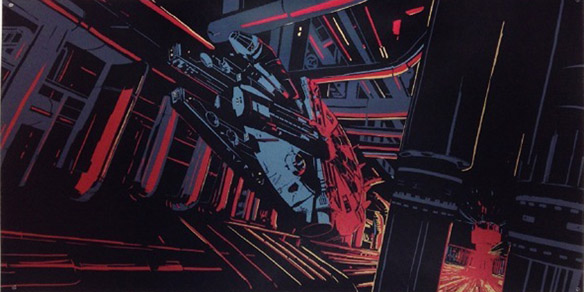 The Star Wars Here Goes Nothing Poster captures one of the coolest moments in Star Wars: Return of the Jedi, which also happens to be the moment when moviegoers realized the Imperial engineers might not be the brightest lightsabers in the universe.

In Star Wars, the Death Star had one major flaw – a trench just big enough for small fighters like X-Wings to fly through, allowing the Rebels to target a vulnerable intake port. In Return of the Jedi, the designers of the new Death Star realized how dangerous this small trench could be so they decided to create an opening big enough for the Millennium Falcon to soar through. Way to go, Imperial engineers.

Of course, it wasn’t a wide-open path and some tricky flying had to be done by Lando Calrissian, which is exactly what we get to see in this colorful poster.

The Star Wars Here Goes Nothing Poster is available for $40 at Raid71.

This Star Wars Return of the Jedi Limited Edition Designer Poster looks amazing. It would look great in your man cave or home theater. It was created by artist Russell Walks and is an officially-licensed Lucasfilm collectible. It shows Luke in his Jedi robes with […]