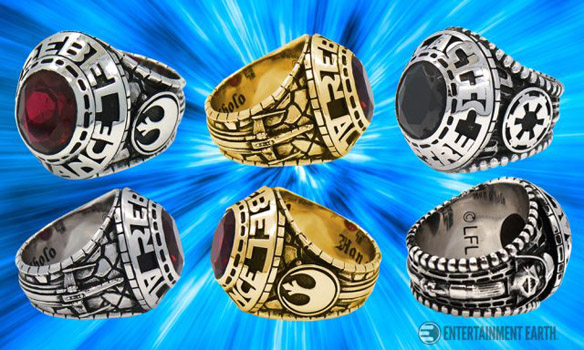 Is your journey from padawan to master (or apprentice to Sith Lord) almost complete? Celebrate the occasion with one of these Star Wars Class Rings.

If you’re part of the Rebel Alliance, you get to choose between either .925 sterling silver or 14K gold vermeil plating/coating, with a design that includes a Rebel Alliance symbol, an X-Wing in mid-flight, and a red jewel as the centerpiece, with the lettering “Rebel Alliance” surrounding it.

On the other hand, if you’ve chosen the Dark Side, well, that’s the only choice you get to make. The Imperial ring features the Galactic Empire insignia on one side and an image of Darth Vader on the other. In the center is a black stone encircled by the lettering “Galactic Empire.” It’s available only in .925 sterling silver. See what happens when you choose to side with evil? Your choices become limited.

Once upon a time ago, when a person mentioned power rings, you knew they were talking about Green Lantern, but as the Officially Licensed Sterling Silver & Enamel Lantern Corp Rings show, the DC Universe is now inhabited by whole armies of people wearing a […]

These Star Wars R2-D2 Sterling Stud Earrings are a great way to show your love of a galaxy far, far away. He docks in your earlobes like he docks in an X-Wing Fighter. Maybe he’ll help you navigate too. They are made of 925 sterling […]

These Star Wars BB-8 Sterling Stud Earrings are an awesome accessory. These droids measure about a half inch tall and will help you represent your favorite Star wars droid. They are made of 925 sterling silver and the studs are flat on the back and […]

Peter Griffin got one.  Cleveland got one; and according to Spider-man, everyone gets one!  Sometimes one may not be enough.  If you want to try to improve your odds on getting 2, maybe you should get the Spider-Man Sterling Silver Necklace.  This 1″ long sterling […]

Darth Vader is ready for your earlobes. These Star Wars Darth Vader Sterling Stud Earrings are impressive. Most impressive. If you find your lack of earrings disturbing, these are for you. They are made of 925 sterling silver and are flat on the back with […]