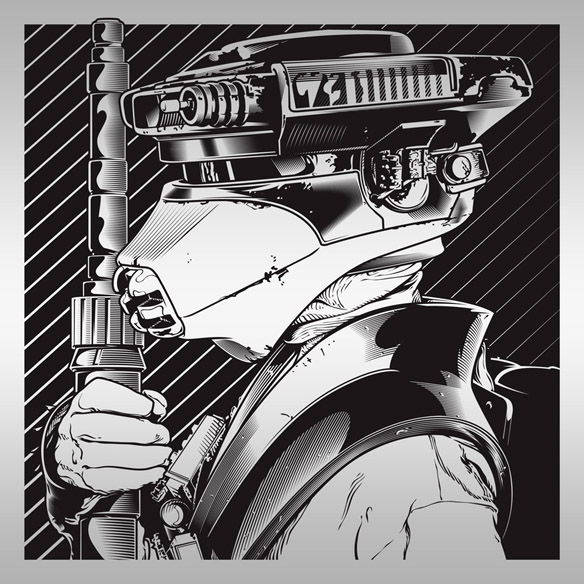 The Star Wars Boushh Laser-Engraved Art proves that true love wears many faces, and that a princess doesn’t let a den filled with blood-thirsty murderers slow her down.

In the Star Wars Expanded Universe (now known as Legends), Boushh was an actual character, a bounty hunter who occasionally tracked down renegade Jedi during the Purge. Unfortunately, his greed got the better of him and he was… umm… forcefully retired. However, his reputation and uniform lived on, being worn by Princess Leia Organa to infiltrate the lair of Jabba the Hutt in an attempt to rescue Han Solo.

Whether you prefer the actual character or the princess in disguise, this 11.5″ x 11.5″ laser-engraved, glossy black acrylic artwork is a great addition to anyone’s Star Wars collection

One of the most memorable scenes in Return of the Jedi is when Leia enters Jabba’s palace disguised as Boushh the bounty hunter in order to rescue Han. Now you can own this Star Wars Leia in Boushh Disguise Maquette and relive those memories whenever […]

These new Jabba The Hutt / Pizza Hut Style T-Shirts and Hoodies combine one of the most infamous villains from Star Wars with the logo of the famous pizza chain. You end up with these awesome shirts that work regardless of whether you are wearing […]

Han Solo’s pride and joy will always keep you on time with the Star Wars Millennium Falcon Artisan Laser-Engraved Clock. Counting down the minutes until Star Wars: The Force Awakens? This is the clock you’re looking for. After the premiere of the film, you can […]

Do you like your Star Wars action figures giant sized? Bigger is always better. This Star Wars Princess Leia Organa in Boushh Disguise Jumbo Kenner Action Figure is just like the one you had as a kid, only bigger! This 12-inch tall reproduction of Princess […]

These Star Wars Engraved Wood Coasters are a classy way to keep your drink from ruining your counters or your furniture. You get a set of 6 coasters: C-3PO & R2-D2, Chewbacca, Yoda, Obi Wan, Han Solo, and Leia. They make a neat gift. Star […]