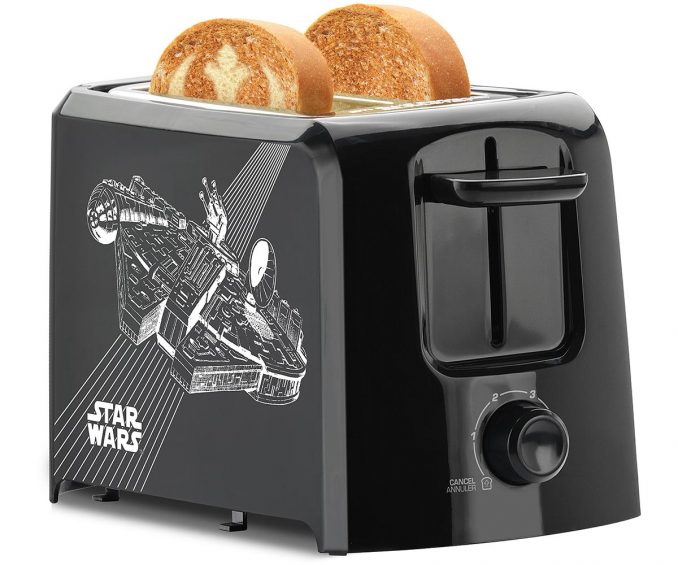 There have been plenty of other Star Wars toasters that have a 3D sculpted shape, like the Darth Vader, Stormtrooper, and Death Star versions. However, this Star Wars 2-Slice Toaster is for people who prefer a simple standard shape, but still want cool Star Wars designs toasted into their bread.

Just adjust the dial to how brown you want your toast, place a slice or two of bread into the wide, self-centering slots, and before long you’ll have toast that features the Imperial Crest of the Galactic Empire and the Starbird Insignia of the Rebel Alliance.

Target your toast and show your allegiance with this striking Star Wars toaster. Pop in your favorite bread and in moments it’s toasted with the Imperial or Alliance Starbird symbols. Wide slots with self-centering bread guides, adjustable browning control with cancel function, toast lift to easily remove toasted bread, and hinged crumb tray.

Purchase this Star Wars 2-Slice Toaster for $24.95 from Shop Disney. It is also available at BoxLunch and Amazon. If you prefer Star Wars characters toasted into your bread, check out the Chewbacca, Darth Vader, and R2-D2 models.

If you’re into the famous, yet anonymous, street artist known as Banksy, you’ll love this Burned Bread Toaster by Banksy. The toaster is designed to look like a chunk of urban concrete with the Banksy signature graffitied on the side. Toast your bread, waffles, or […]

There’s been many Star Wars themed toasters already, with my favorites being the Darth Vader, Stormtrooper, and Chewbacca models. But if you like Astomech droids, you’ll want to get this Star Wars R2-D2 Toaster. Not only does it feature R2-D2 graphics on the toaster, but […]