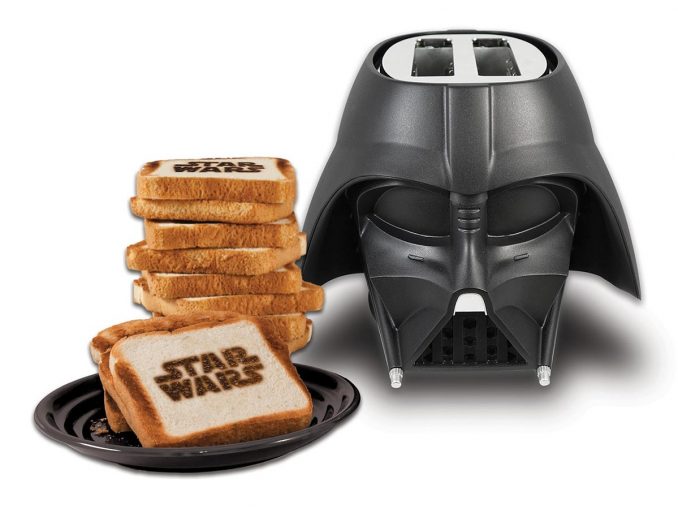 There have been many Darth Vader toasters over the years, from one we wrote about over 10 years ago, to one just a couple months back. However, this new Darth Vader Molded Toaster is probably the best one yet, with it’s awesome 3D molded design. (It’s most similar to this Darth Vader Toaster from a few years ago.)

Not only does this toaster look just like Darth Vader’s helmet, it also imprints each slice of toast with the Star Wars logo. It’s just what you need to start off each day Star Wars style. Just have Aunt Beru bring over some blue milk, and you’ll have a complete breakfast.

“Luke, I am your toaster.” The empire strikes back with deliciously toasted bread, waffles and English muffins courtesy of the Star Wars Darth Vader Toaster. This sleek, all-black exterior toaster imprints the Star Wars logo on every slice.

Buy this Darth Vader Toaster for $39.99 at Bed, Bath & Beyond. Also sold at Home Depot, BoxLunch, Amazon, Kohls, and Walmart.

If you like this, also check out the Darth Vader / Stormtrooper Panini Press, Chewbacca Toaster, Stormtrooper Toaster, and Death Star Toaster.

Themed toasters can be a fun way to start your day. This officially licensed Domo Toaster will have you grinning as wide as our apple hating friend when the two slice toaster toasts a picture of Domo’s likeness on each piece of bread. Domo Toaster […]

Unleash the full might of the Empire with the Star Wars Death Star Toaster. Sure, with Star Wars: The Force Awakens, we got to see the Starkiller Base but the Death Star is still the ultimate in awesomeness when it comes to weapons that can […]