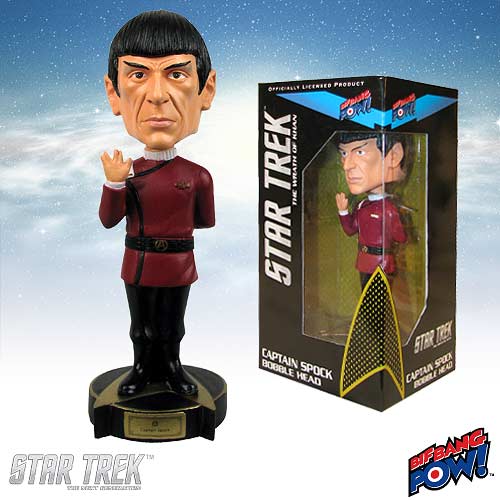 Live long and prosper. And collect cool Star Trek stuff like this Star Trek The Wrath of Khan Spock Bobble Head. It is Spock as he was dressed in Star Trek II.

Captain Spock also has his fingers parted in the traditional Vulcan salute. He stands about 7-inches tall, including the base. The details are nice and Spock is wearing what I think is the best Star Trek uniform ever.

Get it for $14.99 from Entertainment Earth. Pre-order it now for February.

This Star Trek Spock Oven Mitt is perfect for baking Vulcan goodies in a warm oven during the fall months while wearing this I Am Spock Vulcan Hoodie at the same time. Bake long and prosper. It’s a logical accessory if you want to avoid […]

Mirror Mirror was one of the best episodes of the original Star Trek series. The crew ran into mirror universe versions of themselves and it was amazing. If you liked the episode, you will want to drink up with this Star Trek Good Spock and […]

You might think that being a Vulcan would mean that Spock is devoid of emotion. Not true. This Star Trek Emotions of Spock Poster shows all of Spock’s emotions. This black and white Star Trek poster shows 16 different Spock emotions and is an officially […]