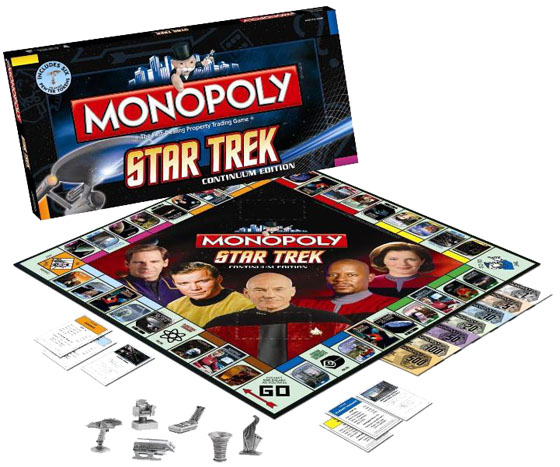 I know your Monopoly collection is getting huge by now; GeekAlerts has shown you several collectible versions: Nightmare Before Christmas and Doctor Who.  We just thought you might want to see this Star Trek Monopoly game and decide for yourself if you want to add it to the collection.  It has all the great captains from all the Star Trek eras on it: Captain James T. Kirk (my favorite), Captain Jean-Luc Picard, Captain Benjamin Sisko, Captain Kathryn Janeway and Captain Jonathan Archer.  This is great way to enjoy monopoly, as long as you don’t argue all night over who was the best captain.

In this custom edition Monopoly, nearly every element of the game has been redesigned: Properties, Money, Houses, Hotels, Community Chest, Chance, Utilities, Railroads, Tokens. Instead of the old stand-by tokens you’ll have your choice of Vulcan Harp, Phaser, Communicator, Klingon Blood Wine Goblet, Shuttlecraft, or Captain’s Chair. The Captain’s Chair is Kirk’s not Pike’s. Still awesome, but well… who wouldn’t want to be Captain Pike? Still, the game includes 22 properties from the complete Star Trek Continuum. Buy, Sell, and Trade properties from homeworlds like Vulcan, Andoria, and Cardassia Prime. Starships stand in for Railroads. You get the idea.

You can purchase the collectible Star Trek Monopoly game at ThinkGeek for $39.99 and at Amazon.com from $16.99.

I think encouraging your kids to go for their passions is the best kind of parenting. Forcing your offspring to become this or that in the future won’t bode well for either of you, that much I can say. However, I’m not at all against […]

You’re never too young to discover the magic of Star Trek and the Star Trek Inflatable Captain’s Chair is the perfect way to let your little one sail off into the world of starships and ladies in super-short dresses. The inflatable chair holds up to […]