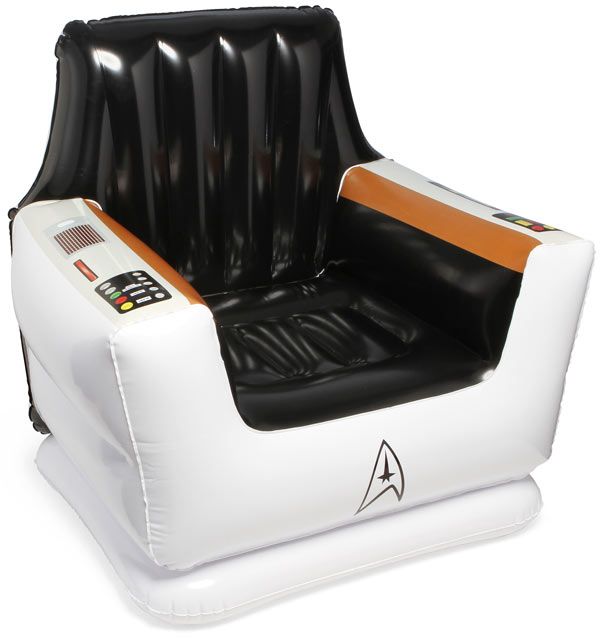 You’re never too young to discover the magic of Star Trek and the Star Trek Inflatable Captain’s Chair is the perfect way to let your little one sail off into the world of starships and ladies in super-short dresses.

The inflatable chair holds up to 120-pounds so the bigger Star Trek captains might want something more solid with the Star Trek Original Series Captain’s Chair Replica, but this officially licensed Star Trek collectible is all that’s needed for the tiny Starfleet officers in the household. They can slip into a gold shirt, plop down on their cushy throne of interstellar authority and let their imagination provide the power for the controls on the armrests, including graphics for Red Alert, Yellow Alert, and jettisoning the pod… which is something Captain Kirk never had to do during his small screen adventures, unlike some of his later counterparts.

Start your kids on the right track and teach them early on who’s in charge with the Star Trek Inflatable Captain’s Chair for $24.99 from ThinkGeek.com.

I think encouraging your kids to go for their passions is the best kind of parenting. Forcing your offspring to become this or that in the future won’t bode well for either of you, that much I can say. However, I’m not at all against […]

The aptly named Dream Chair Chaise Lounge Chair is what happens when you combine a hammock and a pool-side lounger for the ultimate in comfort and relaxation. Patio loungers are nice, but you can’t gently swing in the breeze. Hammocks are relaxing, except for getting […]

While it may not be as bold and unique as the Octopus Chair, Villain Chair, or Ferrari Chair, the ZUO Modern Unico Office Chair is beautiful and functional. Even more importantly for anyone on the market for a new office chair, the Unico chair by […]

A lot of you dug the Hamburger Bed, which is about as dreamy as beds get. It really ought to be mass produced. Another piece of furniture good enough to hang a fang on is this Hamburger Nod Chair from the Land of Nod. Sure, it’s designed for kids aged […]

There’s an elephant in the room and it loves confrontation; even if it’s with your bum. It’s the Phante Kids Elephant Chair by Zuo Modern Contemporary. The Zuo Modern Phante Chair comes in several cheerful and contemporary colors that would look swell in any child’s […]

These are the voyages of the inflatable starship Enterprise. If you have the air, this Star Trek U.S.S. Enterprise Inflatable is ready to hang in your home. It has loops that let you hang it from the ceiling. You could also just bounce it around […]