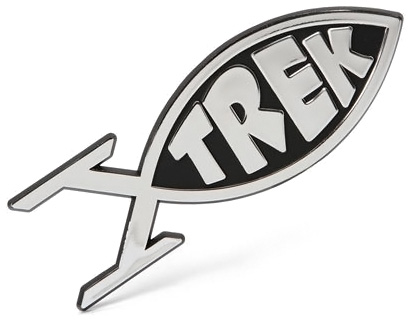 We’ve all seen countless cars with the Ichthys fish emblem (or the Darwin version of it) on their bumper, but now geeks have a version especially for them. Trekkies can get the Star Trek Fish Car Emblem, which has an adhesive backing to easily stick to metal or plastic, to show their desire to boldly go where no man has gone before…in their automobile. The design is really quite innovative, because before seeing this I never realized the Enterprise came anywhere close to resembling a fish.

Boldly go and proclaim your love for all things Trek. Lament that your car doesn’t have an anti-matter warp core, or is armed with photon torpedoes! Show everyone you know, everywhere you go, that infinite diversity in infinite combinations is your prime directive! Ok, maybe that was a stretch, but still – there’s nothing like being a Trekkie (shakes fist – ownnn iiiiiit…) and having a Trek Fish Car Emblem shining proudly on your vehicle.

Recently we posted the cool Trek Car Emblem, a version of those Christian Ichthys fish car emblems for Star Trek fans. Now H.P. Lovecraft fans can rejoice with the Cthulhu Car Emblem. This Cthulhu emblem is easy to stick on your car (or other smooth […]

Driving around Southern California you see quite a few vehicles with the “Darwin Fish” car emblem. In fact, you see a lot more than the ichthys symbol these are meant to parody. Regardless of your religious views, you have to admit that the Darwin fish […]

There are plenty of ways to incorporate fishy things into your everyday life. You can decorate your curbside with Goldfish Garbage Bags, stick a Cthulhu Car Emblem on your car, tote your office supplies in a Hokke Mackeral Pencil Case, rest your head on a […]

This Star Trek Sciences Emblem Clock is the only logical timekeeping choice. It is a wall clock with the Original Series badge shape. It has a subtle blue backlight that can be toggled on or off too, insuring that it casts a nice futuristic glow. […]

This Star Trek Injection Molded Emblem marks your car so that others know you are a Star Trek fan. It has a super-shiny chrome-like finish and is in the shape of the Enterprise. It has a peel-away aggressive adhesive backing and measures 3 1/2″ long […]

The Star Trek U.S.S. Enterprise Chrome Injection-Molded Emblem lets you show every one on the road that wherever you are going, you are going there boldly. The adhesive backing on this black-and-silver emblem lets you attach the iconic starship to your car or just about […]

If you are looking for an awesome iPhone 5 case, look no further. These DC Comics Distressed Emblem iPhone 5 Cases look amazing. They are perfect for DC fans who love Batman and Superman and they make a nice gift too. Put one in a […]

Turn your car into the Batmobile with this Batman Logo Injection Molded Emblem. Well, it may not have the power and style of the Batmobile, but it’s a start. It looks just like the make and model emblems on your car. This should make your […]