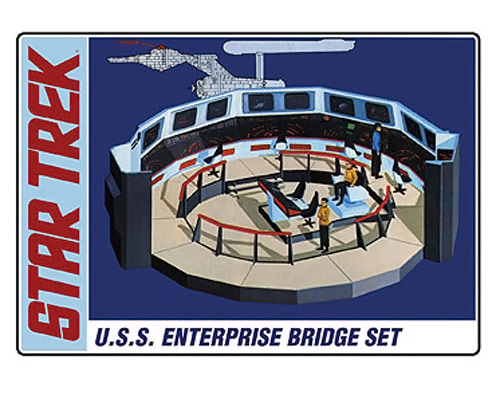 A true blast from the past rockets into modern times in the form of the Star Trek Enterprise Bridge Set 1:32 Scale Model Kit, providing some fun for both old and young Trekkers.

Based on the bridge of the Enterprise from the 1970’s TV series, the model, which was originally available in the mid-70’s, has been re-released with additional wall sections, updated decals, and the materials needed to build seven characters: Kirk, Spock, Bones, Sulu, Chekov, Uhura, and Scotty.

If you’re looking for a way to bridge the generation gap, nothing beats letting the kids play with the same (or very similar) toy you played with when you were a kid.

The Star Trek Enterprise Bridge Set 1:32 Scale Model Kit is available for $30.99 at Entertainment Earth and about $23 at Amazon.com.

If you have ever wanted to see the inner workings of the starship Enterprise, then you can proudly display this Star Trek Enterprise Cutaway Model and have a look anytime you like. This fully painted cutaway model of the USS Enterprise lets you see the […]

The only thing better than getting a Star Trek Enterprise model is getting a lunchbox with it. You get both with this Star Trek: TOS Enterprise Model Kit and Tin Lunch Box set. You can build the most recognizable spacecraft in science fiction, the Original […]

If you’re a major Star Trek fan, chances are you loaded up on some of the really cool Star Trek gadgets like the Enterprise Bottle Opener, Enterprise Pizza Slicer, and Klingon Corkscrew. Now you have a place to keep all these gizmos neatly organized: the […]

The Bridge crew of the Enterprise are ready to seek out new civilizations and boldly go where nobody has gone before, and the Star Trek: The Next Generation Build-a-Bridge Deluxe Bobble Heads are ready to get underway with their mission of providing entertainment for you. […]