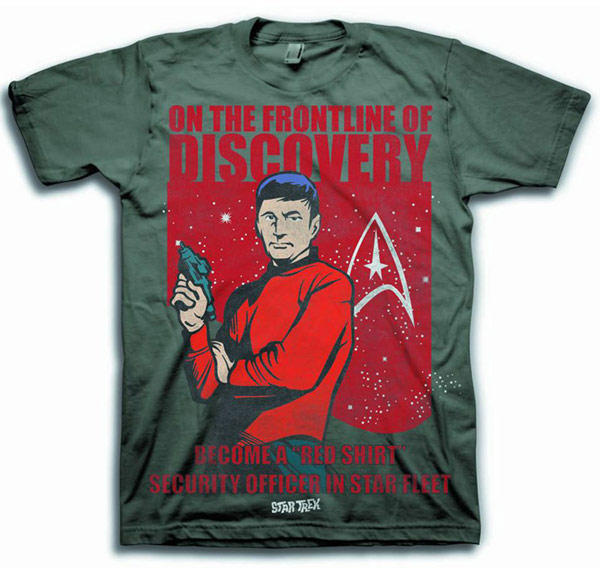 Starfleet must have a hard time finding security personnel after the propaganda created by the old Star Trek TV show, but wearing the Star Trek Become A Redshirt T-Shirt will allow you to join the fight to set things right and insure that all starships have enough security officers.

In classic Trek, it seemed like the guys in the red shirts were always getting killed but that’s simply not true. Lots of Redshirts survived that five-year mission. Just look at the facts – Montgomery ‘Scotty’ Scott survived, and…ummm… well. Hmmmm. Yeoman Rand also lived, although I guess that’s more of a red dress than a red shirt.

Okay!!!! I give up. If you promote the wearing of the ominous red shirt, you are promoting cannon fodder… but that might not necessarily be a bad thing. I can think of a few people that would look pretty darn good in red. *wink, wink*

You can convince your ‘friends’ to see the galaxy (for a little while, anyway) with the Star Trek Become A Redshirt T-Shirt for $16.99 at Urban Collector.

I Survived the Red Wedding T-Shirt

Is it too soon for this? Do you need more time to grieve? If ‘red wedding’ doesn’t make your insides clench up, you need to hold off on checking out the I Survived the Red Wedding T-Shirt because you obviously aren’t caught up with Game […]

Starfleet is all about the ladies with the Star Trek Join Starfleet Today Flyer T-Shirt. To boldly go where no man has gone before. That’s what Star Trek is all about, and this eye-catching Starfleet recruitment flyer lives up to those words because there’s not […]

We can all use a pick-me-up, and sometimes it’s surprising how the littlest things will turn a frown upside-down. For instance, the Smile and Wink Lenticular Waste Basket features the classic yellow smiley face that winks at you as you walk by. Who knew that […]

The next time you are having a cup of cold tea with your Starfleet admiral buddies, use this Star Trek Starfleet Ice Tray. It might get you a promotion. This Star Trek silicone ice cube tray makes 8 “command” insignia Starfleet ice cubes. Perfect for […]

Yes, I realize it is still winter in many places, but good things go fast and you can expect this Hello Kitty Wink Polka Dot Bikini to sell fast. The bottom and top are sold separately, so you can go with one or both. The […]

We’ve all been there. The work-week is on the downhill slide, you’ve just had a big lunch, and you can feel your eyelids slowly gaining weight as sleep beckons. The Anti-Sleep Wink Glasses will use your own body to make sure you stay awake. According […]