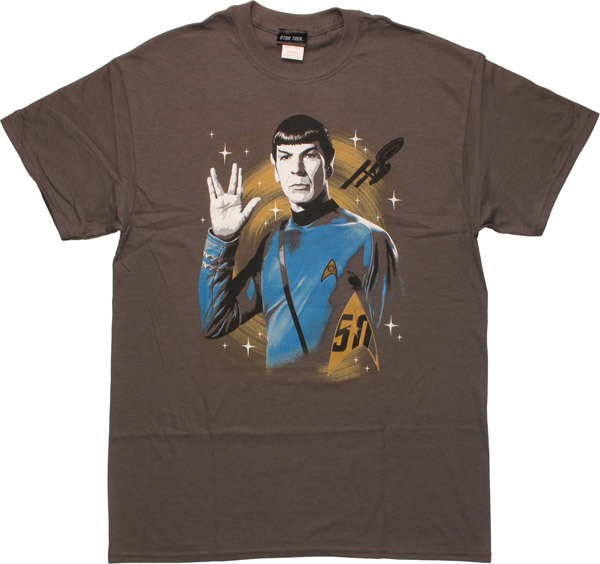 Half a century ago (September 8, 1966 to be exact), the televised adventures of Captain Kirk and the crew of the Enterprise introduced a whole generation of TV watchers to the future. Celebrate the 50th anniversary of the franchise that’s still earning money at the box office with this eye-catching shirt that features Leonard Nimoy’s Commander Spock, a silhouette of the U.S.S. Enterprise, and the 50th anniversary Star Trek logo.

Let everyone know that a Federation vehicle is approaching with this cool Live Long & Prosper: Spock Car Decal. Plus it delivers a good Vulcan message. It comes with a second tiny decal for your laptop or wherever you want to put it. Spock hands […]

Spock once said, “The needs of the many out way the few. Or the one…” Well, there are many Star Trek fans who need to get their hands on this Star Trek Spock Live Long and Prosper Glass Tumbler.

Every geek knows about the Vulcan Salute that was popularized by Leonard Nimoy’s character, Spock, on Star Trek some 45 years ago. Many fans still use this salute with their friends today and we even see popular TV Shows like The Big Bang Theory using […]

Trekkers, or is it Trekkies?, will want to display their favorite pictures in this awesomely geeky Star Trek Spock Live Long and Prosper Picture Frame. With Spock and the Enterprise in front it’s as if the Vulcan is presenting your picture to the world. It […]

The Star Wars Star Trek Movie Watchers T-Shirt shows what the heroes and villains in a galaxy far, far away do when they’re not busy trying to either rule or defend the galaxy. Han and Chewie might pilot the Millennium Falcon, and Luke and Darth […]

The man. The myth. The legend. The ears! Pay your respects to Leonard Nimoy in Star Trek style with the Live Long and Prosper T-Shirt, which lets his memory help others to possibly explore strange new worlds and go where nobody has gone before. Mr. […]

This Star Trek Live Long and Prosper 20 oz. Mug will always remind you how to live. And it will remind you that Spock needs more sayings. Spock rocks this colorful mug, giving the Vulcan salute on one side with the phrase “Live long and […]