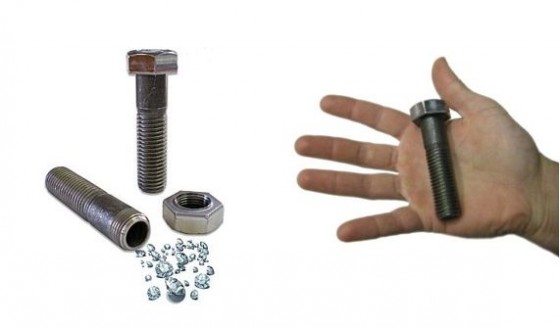 Got some prized jewels to stash covertly when you’re traveling? If you’re a bit paranoid when it comes to carrying small, valuable items while you’re on the go, then it might be a good idea to get the Spy Bolt Covert Secret Container so you can afford yourself some added protection.

Just make sure, though, that the valuables you’re carrying fit into the tiny and smartly disguised container. If a thief happens to chance upon you, then no worries. Chances are, he or she won’t probably pay too much attention to a rusty and worn looking bolt at the bottom of your bag, as opposed to if you had chosen to carry along a portable safety deposit box instead, right?

The Spy Bolt is an updated and improved version of the old Soviet KGB “dead drop” hollow bolt used during the Cold War. It features an O-ring seal for weather-proof storage of small valuables, communications, etc. It has reverse threading on the bolt head for additional security.
This new version utilizes a 3/4″ diameter bolt providing a larger storage area than the original. Its secret storage compartment has a diameter of .49″ and a maximum depth of 2.7″. Overall length is 3.43″.

You can score one of these Spy Bolt Covert Secret Containers from Amazon for $19 each.

Do you know what Crayola tastes like? Well, if you were a kid once who was left unsupervised with a huge box of crayons, then you’ve probably taken at least a bite or two of the ones with the more appealing colors. (I took a […]

This radio controlled spy car has a feature that you won’t find with the R/C Snooper Robot or the Rovio Wi-Fi Spy Robot – it allows you to spy in the dark. Put on the lightweight headset with the single LCD lens to ensure you’re […]