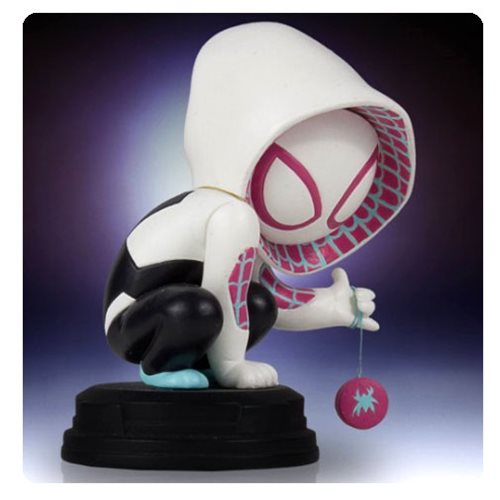 When she’s not performing in a band, hiding her true identity from her police captain father, or feeling guilty about her Peter Parker’s fate, Spider-Gwen just hangs out on rooftop chimneys, chilling with a yo-yo. At least that’s one idea of what she does with her free time.

Based on artist Skottie Young’s variant baby cover for Spider-Gwen #1, the statue measures 3 1/2-inches tall and is limited to just 3000 pieces.

The Spider-Man Animated Spider-Gwen Statue will be available February 2017 but it can be pre-ordered now for $69.99 at Entertainment Earth.

The Man Without Fear becomes the Boy With Just A Little Bit of Fear with the Marvel Daredevil Animated Statue. Based on Skottie Young’s baby version of the character featured on the variant cover of Daredevil #1 (2014 All New Marvel Now Series), this little […]

A bit of bad luck had Peter Parker eventually ending up in the arms of MJ but the Spider-Man Gwen Stacy Polystone Statue offers an artistic and stylish look at Pete’s first true love. I always preferred Gwen Stacy over Mary Jane Watson but destiny […]