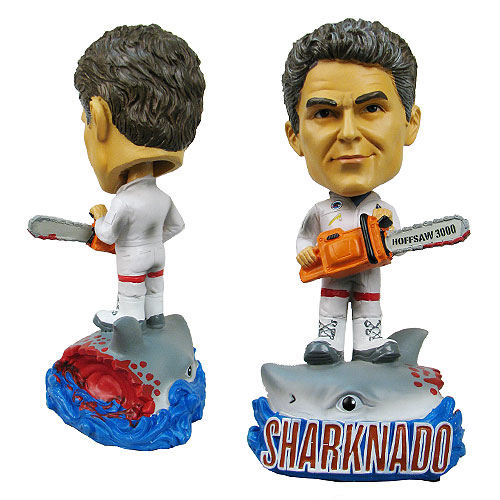 Two unbeatable forces of nature collide with the Sharknado vs. The Hoff Bobble Head, and your world will never be the same again.

When you thought sharks being hurled through the air in Sharknado was too much awesomeness to top, SyFy came out with a sequel, and when you were convinced the insanity couldn’t be taken to the next level, a third sequel came swimming our way and the powers-that-be did the only thing they could think of to increase the magnitude of greatness within the franchise – they brought in David Hasselhoff.

This approximately 7-inch-tall bobble head reveals that at least one shark learned the hard way that it’s bad news to hassle the Hoff, with the former Knight Rider standing upon a bloody shark head with his trusty HoffSaw 3000 ready to make Sharknado sushi.

The Sharknado vs. The Hoff Bobble Head is available for $17.99 at Entertainment Earth. Also at Amazon.com.

Keep others away from your coffee with this handy Caution Sharknado Area Mug. No one wants to brave a Sharknado. One side reads “Caution: Sharknado Area” with a warning sign. The other side says Sharknado / Enough Said with the Sharknado logo. Who would be […]

Hot on the heels of Sharknado 3 comes Archie vs. Sharknado, with the sharknado-filled tornadoes crashing down on Riverdale. Archie, Betty, Veronica, Jughead, and the rest of the gang just can’t catch a break. First, a leisurely vacation turned them into intergalactic prey in Archie […]

There’s nothing more dangerous than a sharknado. Fortunately this Sharknado Bobble Head only looks dangerous. It won’t chomp you with its teeth. This bobble head is based on the hit Sharknado film franchise and is a shark being whirled around inside of a tornado, hungry […]

How will you survive the impending Sharknado? You know it’s going to happen. Well, this Official Sharknado Survival Guide will prepare you for the inevitable encounter. Be prepared. Don’t be shark food. This book has vital information about dozens of unnatural disasters and ungodly monsters […]

Forget about the umbrella because, according to the Sharknado Weather Forecast T-Shirt, a portable cage is more along the lines of what you’ll need when this storm blows through. Enjoy the nice weather Monday through Wednesday because Thursday’s forecast is filled with flying sharks. Remember […]

A giant tornado has sucked up a ton of sharks and is now heading for the city? This sounds like a job for the Man of Steel, and the Sharknado Superman T-Shirt shows the super-powered Kryptonian taking on the airborne eating machines. The Syfy movie, […]