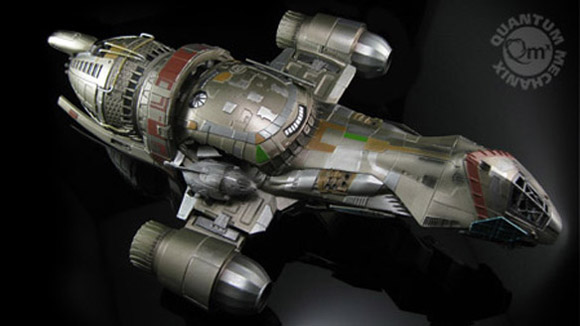 Become a Browncoat and add the Serenity 1:250 Scale Cutaway Replica to your Firefly collectibles because Captain Mal and his motley crew would’ve just been a bunch of space bums without the ship that allowed them to defend the weak, fight the Alliance, and make a few bucks on the side.

Joss Whedon once described the Serenity as the 10th character of the series that was cancelled way too soon, and this highly-detailed replica lets you explore both the exterior and the interior of the ship that opened up the ‘verse for our gang.

The removable upper hull sections reveal interior details that will let you get as familiar with the ship as Malcolm was, and you don’t have to worry about screen accuracy because the replica was created using the original 3D effects files from the TV show.

The Serenity Cutaway Replica is comprised of more than 200 hand-painted parts and includes a premium display stand that will allow you to show off your favorite boat with pride. A limited edition of just 2,000 pieces!

The Serenity 1:250 Scale Cutaway Replica will be available July 2014 but it can be pre-ordered now for $329.99 at Entertainment Earth. You can also sign up for the waiting list on QmxOnline.com, which will have the replica available for $349.95.

If you have ever wanted to see the inner workings of the starship Enterprise, then you can proudly display this Star Trek Enterprise Cutaway Model and have a look anytime you like. This fully painted cutaway model of the USS Enterprise lets you see the […]

This Firefly Serenity Ice Cube Tray is all kinds of awesome. Chill your drink with the Firefly ship Serenity. It is freezer, dishwasher, and oven-safe You can use it to make ice, to mold candy, or to bake tiny cakes. All in the shape of […]

There are lots of cool fictional spaceships to drool over but the 4D Vision Saturn V Cutaway Scale Model proves that real life has some pretty awesome space technology, too. While it’s true nothing can really compare to Star Wars’ Millennium Falcon or Firefly’s Serenity, […]

This Firefly Serenity Striped Polo will keep you looking good. It has printed line art of Serenity in white and black on the left chest. It is a red and navy blue striped polo, with a navy blue button-up collar. This would make an awesome […]

The only thing better than Serenity would be Serenity in gold. This Firefly Serenity Replica SDCC 2013 Exclusive Gold Key Chain delivers just that. Shiny! Now you can have Serenity wherever you go, with your own golden pocket-sized Firefly-class vessel. This solid-metal keychain has a […]

You can’t take this drive from me… This Firefly Serenity Flash Drive is the shiniest flash drive ever. It is a die-cast metal replica of Serenity. All you have to do is push the top button and an 8GB flash drive pops out. Let Mal […]

If you have seen the movie Serenity, then you will recognize this trio. They are the Fruity Oaty Bar mascots from the commercial in Serenity. And now you can get your very own Serenity Fruity Oaty Girls Bobble Head Maquette Set. This awesome set is […]

You are going to be styling when you wear this Firefly Serenity Charm Bracelet. It’s the most fashionable way to celebrate the show. It fits all major bracelet brands (PANDORA, Chamilia, Biagi, Troll, etc.) and this silver bracelet comes with a Free Timmy Charm. It’s […]