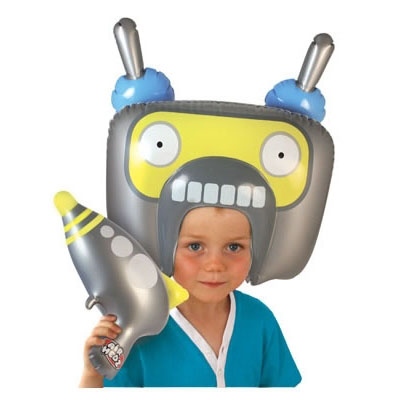 Kids totally love the toys we feature on GeekAlerts, but often times they’re amused by the simplest things like cardboard boxes, balloons and inflatable stuff. Here’s something I’m certain kids will dig because it’s part-costume and part-toy: the Robot Air Hedz inflatable robot head and blaster.

It’s not clear whether we’re born with the affinity to shoot things or whether it’s a learned trait, but we have Homo habilis to thank for inventing weapons – oh yeah, and thanks for the invention of tools as well. In any case, humans have an incredible knack for using weapons starting at a very early age. If parents don’t give them weapons, kids manage to turn sticks and stones into weapons. Which brings me to my point that the Air Hedz blaster gun is not such a terrible choice of toy weaponry, relative to the ones on the market that can actually do some damage. The blaster is soft, light, and perfect for little hands to grip. Trust me, the ‘ptchoo, ptchoo’ sound effects will come naturally. You could even nickname it the second-generation “Illudium Q-36 Explosive Space Modulator” by Marvin the Martian.

The matching robot head is more silly-looking than scary, and encourages imaginary play with the robot’s big eyes, silver shine, and exaggerated antennas. What’s not to love about him? You can inflate or deflate the head to fit yours or your child’s head, making it versatile and truly one-size-fits-all. The head might even provide a little cushioning for those unexpected wipe-outs.

The Robot Air Hedz set is available at Neatoshop for $11.95.

Kids love dinosaurs. Heck, most adult geeks love them too. Now you can have your very own Inflatable Dinosaurs that you can play with anywhere. They are easy to blow up and easy to deflate so as long as you have the breath to do […]

When you want to have a fun fight, nothing beats having giant fists. Well, almost nothing. These Giant Robot Battle Fists will pommel any opponent. All in fun of course. These inflatable fists are comfortable, powerful and completely awesome. Technically you aren’t supposed to throw […]

Whole World in a Can Inflatable Globe

With the Whole World in a Can Inflatable Globe, you can literally hold the entire world in your hands–but of course, you’ve got to inflate it first. In a culture where everyone wants everything almost instantly, it can’t get any more instant than this. Aside […]

Get ready for this year’s big Halloween bash in style with the Inflatable Skeleton Cooler. This thing is over two feet tall and almost four feet long…big enough to take a quick-rinser in if you need to shake the Halloween party cobwebs out of your […]