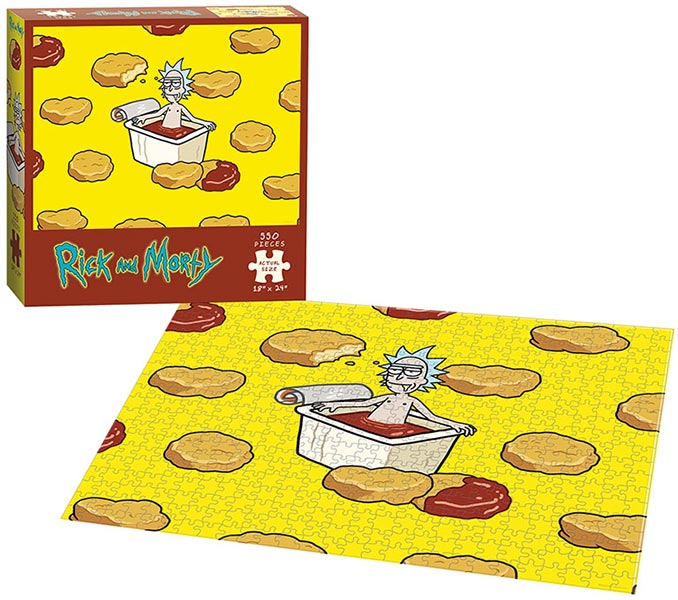 In the first episode of season 3 of Rick and Morty, The Rickshank Rickdemption, Rick talks about how much he loves the McDonald’s Szechuan Chicken McNugget Sauce. In fact, he loves that “Mulan McNugget sauce” so much that he would probably bathe in it if he could, as depicted in this Rick and Morty Szechuan Hot Tub Jigsaw Puzzle.

After the episode aired, many people wanted to taste this sauce that McDonald’s had temporarily had back in 1998 to promote the Mulan movie. When McDonald’s brought back Szechuan sauce last October, Rick and Morty fans were ecstatic. That turned to disappointment for many because quantities were too limited and many people couldn’t get any. Fortunately, McDonald’s produced 20 million more packets and made them available at all McDonald’s locations earlier this year.

Whether or not the flavor of the dipping sauce lived up to the hype in your mind, this Rick and Morty Szechuan Hot Tub Jigsaw Puzzle is a cool reminder of the whole mania that took place. With 550 pieces and some big blocks of solid color, this looks to be a challenging puzzle too.

Immerse yourself in Szechuan sauce along with Rick as he wades in a “hot tub” of the elusive sauce in this 550 piece puzzle. It’s an experience to remember!

Buy the Rick And Morty Szechuan Hot Tub Jigsaw Puzzle for $10.99 at Entertainment Earth. It is also sold at Hot Topic and Overstock.

Are you ready for a spicy game of chance? If so, this Hot Sauce Roulette Game will have your taste buds begging for milk. With 12 levels of hot sauce, this is the one gambling game where you want to avoid a hot streak! The […]

The Doctor without clothes? There was a time when the scene on the Doctor Who Hot Tub Time Machine T-Shirt would have had me outraged over the mere idea of seeing the Doctor naked… but then the Doctor Who Christmas Special happened. There’s no need […]