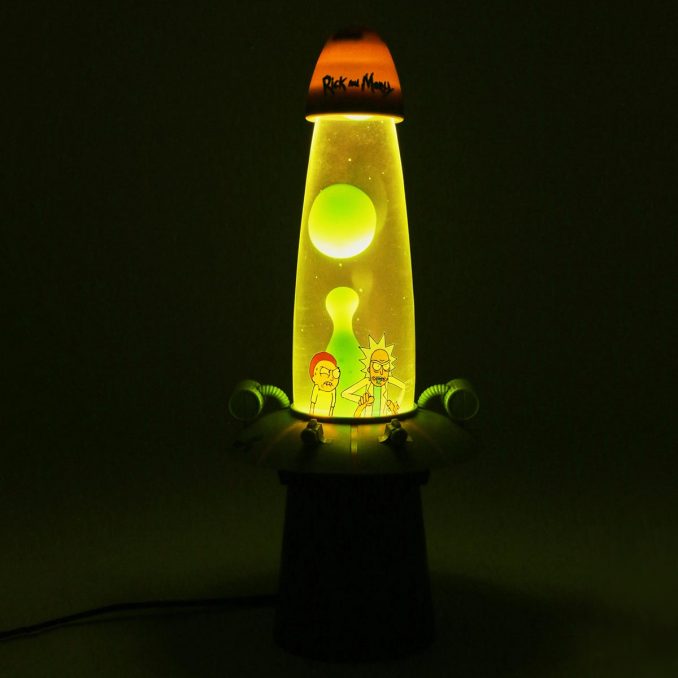 Dim the lights, put on some psychedelic music, and stare at the Rick and Morty Space Cruiser Motion Lamp and you’ll feel like you’re being transported to another dimension.

This modern version of a lava lamp is built around Rick’s Space Cruiser, and shows Rick at the wheel and Morty looking like he’s about to go postal. The glowing green liquid is extra trippy and is also resonant with the colors of a Rick & Morty portal. It stand about 16″ tall and plugs into a regular electrical outlet. Apparently it’s not powered by a Microverse Battery.

Feel like you’re being transported to another dimension when you stare into this motion lamp from Rick and Morty. Sporting their spaceship design and glowing green liquid, it’s almost as trippy as an episode of the space traveling show.

Buy the Rick and Morty Space Cruiser Motion Lamp for $49.90 at BoxLunch. It is also listed at Fun.com.

Rick and Morty: The Ricks Must Be Crazy Multiverse Game

Rick and Morty: The Ricks Must Be Crazy Multiverse Game is a brand new board game from Cryptozoic Entertainment. In the game, you introduce marvelous power-making technology to the worlds you’ve created (stealing most of it for yourself) as you can take on the roles […]