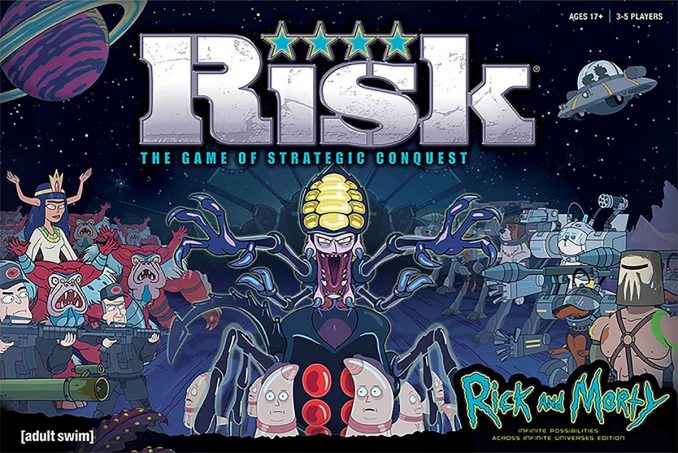 This Rick and Morty Risk Game is perfect because the show naturally goes with strategic conquest. From the second episode of the series when the family dog, Snuffles, is bent on world domination to Rick Sanchez’s power throughout the multiverse.

This officially licensed Rick and Morty version of the Risk board game of strategic conquest is for 3 to 5 players. On the game board, there are 6 main regions: Earth C-137 Area, Crazy Outskirts, Unity’s Planet, Fringe Region, Citadel of Ricks, and Purge Planet. There are 5 factions which include Gazorpians, Robot Dogs, Post-Apocalyptic People, Mythologs, and of course, the U.S. Government.

Play the classic game of strategic conquest with a Rick And Morty twist. This custom Risk edition features factions of beings from the show, vying for control of Planets and Locations along the Central Finite Curve. The five power driven factions include Mythologs, Robot Dogs, Gazorpians, Post-Apocalyptic People, and of course, the U.S. Government. Each faction will have its own Leader that grants extra power in the territory the Leader occupies.

Buy the Rick and Morty Risk Game for $49.99 from ThinkGeek. It is also sold at Entertainment Earth, Walmart, Fun.com, and Amazon.

Rick and Morty fans are known to be intense, such as how hyper the quest for Szechuan Sauce proved to be. If you’re such a fan, then you’re probably confident to compete against others in Rick and Morty Trivial Pursuit. You’ll have to know the […]

You’ll never be lonely if you have this Rick and Morty Giant Inflatable Pickle Rick to keep you company. He’s big enough to sit with you while you binge watch Rick and Morty. In fact, when they say “giant” they mean it, because this big […]