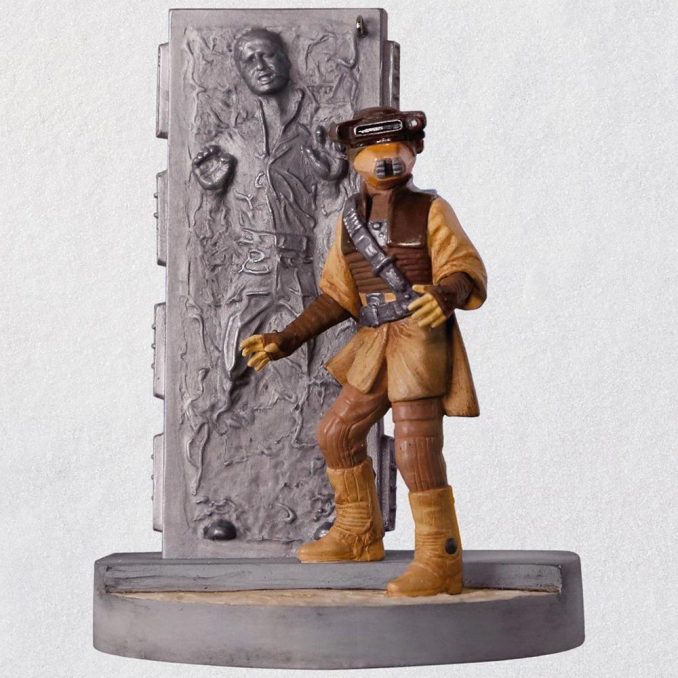 This year Hallmark has some fantastic Christmas ornaments for Star Wars fans, such as the Death Star, Millennium Falcon, R2-D2, and X-Wing Ornaments. It isn’t just characters and starships either, they also have ones like this Return of the Jedi Rebellious Rescue Ornament that commemorate an iconic scene from the Star Wars movies.

This one captures the moment when Leia frees Han Solo from carbonite. While it looks great in pictures, it’s even more impressive in person because it features light and sound. Press the button, and Han glows red as he heats up and this movie dialog plays:

After being frozen in carbonite as part of Darth Vader’s attempt to capture Luke Skywalker in Star Wars: The Empire Strikes Back™, Han Solo faced an uncertain fate. Star Wars: Return of the Jedi™ opens with Princess Leia’s desperate attempt to rescue Han—now Jabba the Hutt’s favorite decoration—while she’s disguised as a thermal detonator-toting bounty hunter named Boushh. This Christmas tree ornament features light and audio from the memorable scene when the beloved scoundrel “thaws” from his hibernation into the waiting arms of someone who loves him. Battery-operated sound and light feature includes three replaceable LR44 batteries.

Buy this Return of the Jedi Rebellious Rescue Keepsake Ornament for $29.99 at Hallmark.com. Also available at ThinkGeek. In fact, it is currently on sale with the 30% Off Star Wars Sale, so now is the perfect time to buy it for just $20.99. (Prices at time of article publication.)

There are amazing Hallmark Keepsake ornaments this year for Star Wars, such as the Death Star Ornament, X-Wing Ornament, and this Millennium Falcon Ornament With Light and Sound that all feature intricate detail and quality craftsmanship. What’s especially cool is that not only do they […]

That Death Star Tree Topper is pretty awesome, but perhaps you already have a Christmas tree topper that’s a tradition. That’s okay because you can get this magnificent Death Star Ornament With Light and Sound instead! This Hallmark Keepsake ornament isn’t just remarkably detailed when […]

Serenity is a distinct and uniquely designed spaceship, as you can see in this impressive Firefly Serenity Hallmark Keepsake Christmas Ornament. Fans of the Firefly television series generally have a great appreciation for this vessel, so it should come as no surprise that this isn’t […]

Christmas is often a time for nostalgia, as you think back on past holidays when you were growing up. If your childhood included stuffing quarters into coin-op arcade games, this Donkey Kong Hallmark Keepsake Ornament will help invoke those wistful memories. Looking just like the […]

Celebrate the classic holiday movie by hanging this National Lampoon’s Christmas Vacation Ornament on your tree. This quality Hallmark Keepsake ornament is styled to look just like Clark Griswold tangled in Christmas lights on top of the roof as in the theatrical poster for the […]

The Legend of Zelda Link Ornament

Not only does Hallmark Keepsake The Legend of Zelda Link Ornament look awesome, but it can also get your nostalgia racing when you hit the button and it plays the classic 8-bit theme song from the original Nintendo game. Created by Hallmark Keepsake Artist Jake […]

The Many Faces of Jack Skellington Porcelain Ornaments

While The Many Faces of Jack Skellington Porcelain Ornaments are made for Christmas trees, they also would make nice decorations for Halloween. Get the best value out of the Hallmark Keepsake ornament set by using them for both occasions. This set of 9 highly detailed […]