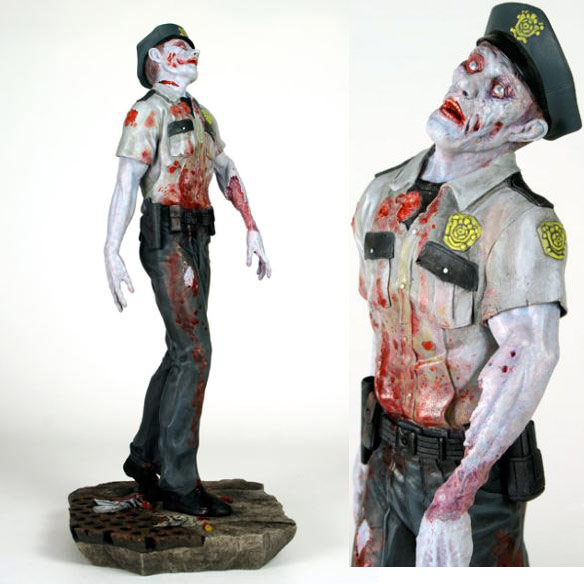 The gang from The Walking Dead might not have it easy but they’re kind of living the good life compared to the residents of Raccoon City. As the Resident Evil Raccoon City Zombie Cop 1:6 Scale Statue shows, even the police force is more about feasting on flesh instead of protecting and serving.

This Resident Evil police officer has definitely seen better days. The 13-inch-tall, highly-detailed statue is made of heavyweight polystone and is limited to only 500 pieces because it’s a part of the 15th Anniversary Resident Evil collection.

Numerous sequels have taken a serious bite out of the franchise’s impact but Resident Evil is still considered a cult classic. Besides, if you’re not into that particular series, you can always include this guy with those zombie collectibles from that other show.

The destruction or salvation of mankind is in your hands – or at least you can pretend it is – with the Resident Evil T-Virus Prop Replica. Will you cure or unleash the zombie plague? Resident Evil fans can imagine they’re the hero or the […]

The Terminator Ultimate T-1000 Motorcycle Cop Action Figure lets you relive all of the classic scenes from T2. The T-1000 is one of the best villains in the franchise. This figure comes loaded with accessories: 3x interchangeable heads, 3x pairs of hands, a bladed arm, […]