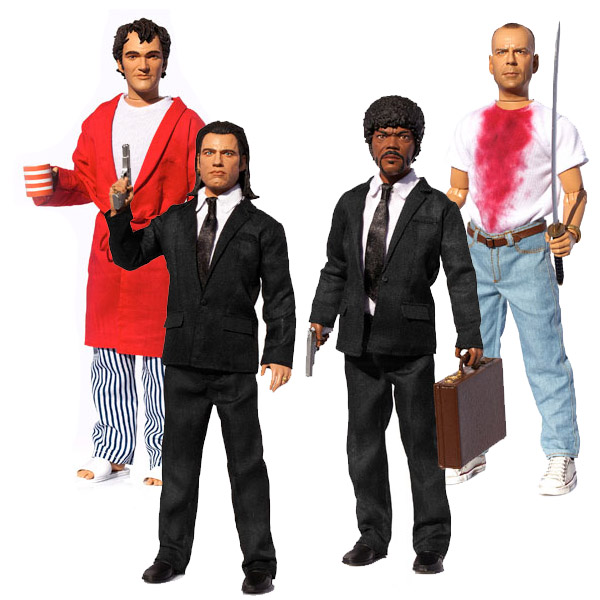 The f-bombs will be dropping like bodies with the Pulp Fiction 13-Inch Talking Action Figures, and you know you wouldn’t have it any other way.

John Travolta, Samuel L. Jackson, Bruce Willis, and Quentin Tarantino are ready to invade your space with these 13-inch-tall figures that actually say lines from the popular Tarantino film. While they might look cute and cuddly, keep in mind that these really aren’t for kids… unless you want your precious angels to say things like “Say ‘what’ again. Say ‘what’ again, I dare you, I double dare you mother f***er, say ‘what’ one more Goddamn time!”

Of course, these figures can be educational as well, with the Vincent Vega figure teaching that the quarter-pounder with cheese is called a royale with cheese in Paris.

The Pulp Fiction 13-Inch Talking Action Figures will be available November 2015 but they can be pre-ordered now for $49.99 each at Entertainment Earth. Choose from Vincent Vega, Jules Winnfield, Jimmy Dimmick, and Butch Coolidge.

We all know luck isn’t a superpower; or is it? Vincent Vega and Jules Winnfield from Pulp Fiction sure seemed to get lucky, and this Pool Fiction – Deadpool Pulp Fiction Mashup T-Shirt is the perfect way to combine two cools sets of hitmen that […]

I’m sorry, did the Pulp Fiction Say What Again! Garden Gnome break your concentration? Based on Samuel L. Jackson’s epic performance as Jules Winnfield in Pulp Fiction, this 6.8-inch-tall polyresin gnome doesn’t like to play games. Did he tell that weed it could grow? Did […]

A classic movie meets a new one when Pulp Fiction and Guardians of the Galaxy join forces for the Guardians of Fiction T-Shirt. When you think about it, having a giant plant and a talking raccoon guard fiction makes perfect sense, and having Rocket Raccoon […]

Sliced cheese is so essential for BBQ season that it deserves to be contained in a special box that looks like a black and white cow. Do your cheese slices a favor and put them in the Moo Cheese Singles Pod. This pod is great for […]

The spirit of Pulp Fiction pops up again on the Doctor Who Time Fiction T-Shirt, bringing us not one, but two Time Lords just taking care of business. We recently showed you the result of mixing Pulp Fiction with Guardians of the Galaxy, but this […]

There aren’t many dishes that can rival the magical powers of mac and cheese, which is why I have it listed at the top of my requests for last meals. For those of you who share a fondness for this popular meal, you might be so inclined to […]