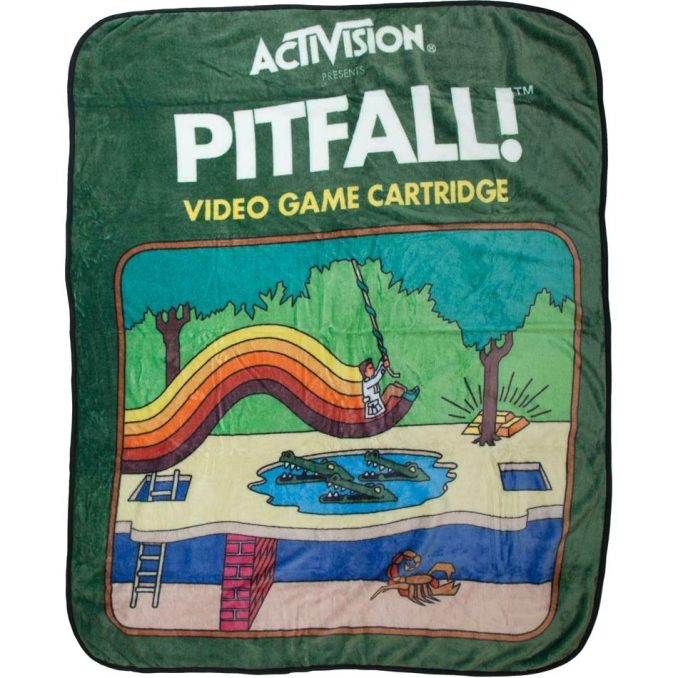 A cozy soft blanket is one way to feel really comfy and wrapping yourself in nostalgia is another. This Pitfall! Atari Cartridge Throw Blanket lets you do both. It’s a big, fluffy throw blanket that looks just like the cover of the box to the video game cartridge Pitfall! for the Atari 2600.

This blanket is really old school.  We’re talking 1982, the year that Pitfall! was released by Activision for the Atari 2600 (aka Atari Video Computer System). If you’re old enough to remember that, you’ll probably really appreciate this throw. It is officially-licensed merchandise and measures 60 inches by 48 inches.

An interesting fact is that Jack Black’s first acting gig was in a Pitfall! commercial back when he was a kid. If you search YouTube, you can watch it. Pitfall! was the second best selling game for the Atari 2600 behind Pac-Man, beating out Asteroids, Missile Command, Space Invaders, and Frogger.

The jungle in Pitfall hides many treasures… but even more dangers. Don’t risk your life (lives?) like a Pitfall Harry. Instead of going on an adventure, stay at home where it’s safe and wrap yourself up in this Pitfall! Atari Cartridge Throw Blanket. Keeping warm in this blanket and playing video games all day is enough of an adventure for us.

Available at ThinkGeek, the Pitfall! Atari Cartridge Throw Blanket is $24.99.

The Centipede Board Game – Exclusive Atari 2600 Edition brings the excitement of the arcade game into the board game world. 2 or 4 players face off as the Gnome and the Centipede. Relive the excitement and adventure in a whole new way. The first […]

This Atari Pong Lines Woven Tapestry Throw Blanket will bring back fond memories of playing Pong from all of those years ago. Those were the days before 3d and virtual reality, but we still loved the games, simple as they were. If you played your […]

This Harry Potter Marauder’s Map Woven Tapestry Throw Blanket has a fun fringe trim and reads “Messrs. MOONY, WORMTAIL, PADFOOT, & PRONGS are proud to present: The MARAUDER’S MAP.” It’s a fantastic way to reveal all of Hogwarts School of Witchcraft and Wizardry—or at least […]