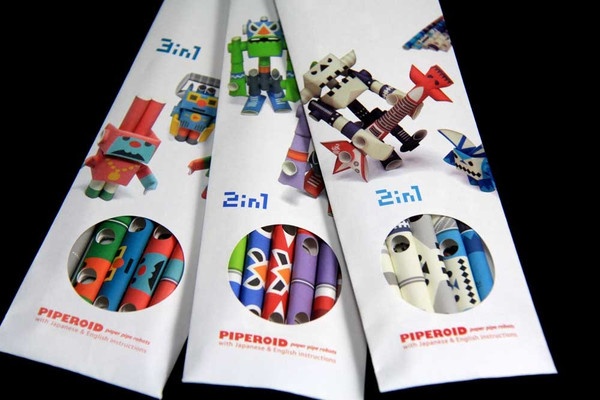 Robots are all the rage these days. It’s not just the boys that want them; little girls apparently love robots too, as I’ve seen lately at our family parties over the holidays where the girls tried to wrangle the toy robots from their brother’s or cousin’s arms. And I don’t mean the conventional robot, but robots like the Cubebot and the Build-a-Robot 2012 Paper Craft Calendar. Another unconventional robot to add to the list is the Piperoids.

Piperoids are robots that can be formed from paper pipes which have been cut and assembled. There are currently three variations of Piperoids to choose from. The cool thing about it is that you get to be a little creative while assembling the robot and working on those mechanical skills at the same time.

Piperoids, from Japan, are paper pipes which transforms into robots by cutting and assembling the pipes.
3 different character combinations available:

The Piperoids are available from Hostile Bacon for $27.95.

Do you ever have days when you feel like poking your eyes out? Splitterbot always has those kinds of days. Splitterbot’s black eye sockets are where you plug in two separate headphone jacks, so that two people can listen in on the same audio at once. Just pop his head off his […]

Wind it up and watch it go! The Katitia Mechanical Robot Wind-up Toy is an interesting dancing mechanical robot that is made of stainless steel with PVC booties. It is quite simple, but has somewhat of a steampunk air to the design (at least the […]