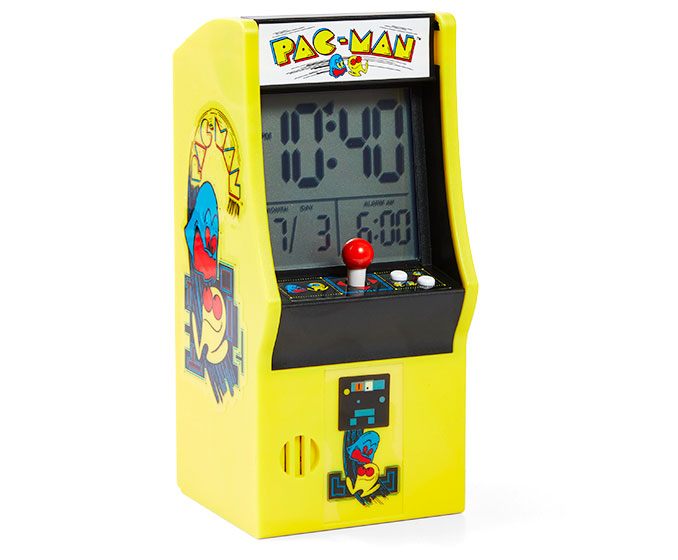 While the previous Pac-Man Alarm Clock looked like the yellow dot-chomper himself, this Pac-Man Arcade Alarm Clock looks like the classic arcade cabinet. There are a couple of features that make it especially cool. One is the inclusion of the original Pac-Man arcade sounds. The other is that the joystick is the control you actually use to set the time.

It stands about 6″ tall and is officially-licensed merchandise. Watch the video below for more details.

Great for fans and gamers, the PAC-MAN Arcade Alarm Clock is an ideal gift solution for birthdays, Christmas stocking fillers or even the office Secret Santa, and is an officially licensed product. The alarm clock is powered by 2 x AA batteries (not included).

First launched in 1980, PAC-MAN was one of the most influential arcade games of the decade. Featuring the iconic pizza shaped hero (based on the Japanese character for mouth), the game established the trend for a mascot led gaming franchise, and the character soon became an instantly recognizable icon of popular culture. Starting from a simple premise of collecting pellets around a maze (whilst being pursued by the four intrepid ghosts of the game – Blinky, Pinky, Inky and Clyde), the game has remained popular ever since, spawning numerous sequels, remakes and spin-offs, and is a much treasured classic by gamers young and old alike.

This Pac-Man Arcade Alarm Clock is $29.99 at ThinkGeek.

Are you one of those hardcore retro game fans that can’t sleep on anything other than your precious Space Invaders Pillows? Guess what, now you can wake up in the same geeky manner using this cool arcade game alarm clock.

If you’re into retro arcade video games, you’ll really appreciate this awesome Pac-Man Lamp with Arcade Sound Effects. If you already have the Pac-Man Ghost Lamp (pictured in the last image in the gallery below), then you absolutely need this one too. Since it’s officially […]