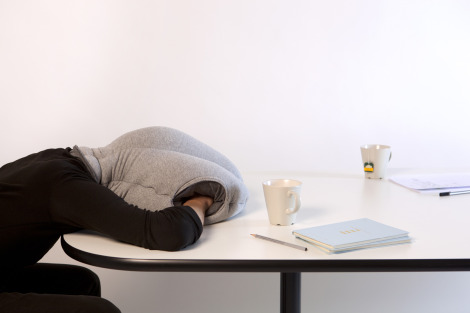 In the mood for a mid-day nap? If the Ice Cream Sandwich Pillow doesn’t do it for you, then you might want to lug out the Ostrich Pocket Pillow out of your overnight bag and stuff your entire head into the plushy contraption.

Have you ever heard of that little piece of trivia that’s also been documented by channels like National Geographic and Discovery Channel? You know, the one that said the when you place a bag over an ostrich’s head, it will immediately start snoozing because it thinks that it’s already nighttime when the sun doesn’t shine in its eyes anymore? If you haven’t, then you already have, because I just told you.

The Pocket Pillow was designed by Kawamura Ganjavian, who probably thought it was a cool thing to design something based from this ostrich fact. However, what he failed to consider was how human beings can breathe (and breathe well) while stuffing their head in the Ostrich. It’s still a design though, so maybe Ganjavian can work out the kinks while he’s at it.

Do you enjoy falling asleep to the sound of your favorite music?  If so, the Sound Asleep Pillow is perfect for you.  It allows you to enjoy all your personal iPod/MP3 music with the comfort of a soft pillow.  This is perfect when traveling on […]

You might want to drool over the Cupcake Pillow and Ice Cream Sandwich Pillow if you’ve got a sweet tooth. Or if you’re more of an Apple fanatic, then the iPhone 4 Pillow should be at the top of your shopping list. However, if you’ve […]

Wow, the possibilities are truly endless with what can be made into a hamburger. We thought we’d seen it all with the Hamburger Coasters, Knit Hamburger Mask, Hamburger Chair and the oh-so posh Hamburger Bed. But now there’s a Hamburger Pillow that would look great as a […]

This pillow has a built-in speaker and connects to your music player, so you can drift off to sleep listening to your favorite music or relaxing sounds.