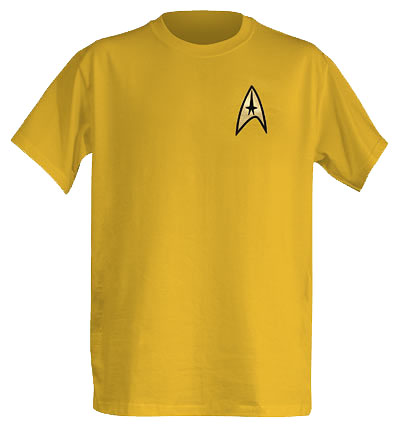 I hope that your office has causal Friday’s this summer; if it does, we have the perfect t-shirt for all the Star Trek lovers out there.  The Officially Licensed Star Trek Original Series T-Shirts come in yellow, red, blue and green.  Now you can show you love for James T. Kirk, Spock, Sulu, Bones, Uhura or even Scotty.  These t-shirts are 100% preshrunk cotton and come with the official “flex and flock” insignia on the chest, except for the captain’s green shirt that has it on the lower hip.  Show you true colors and choose the Star Trek shirt that represents your dream position. 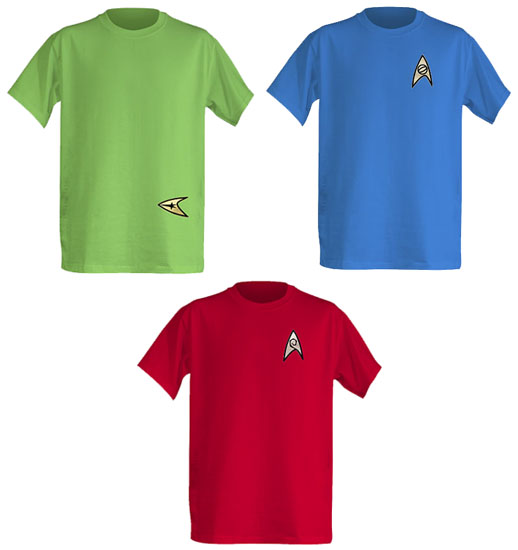 Set your phasers to fun. This Officially Licensed Star Trek Pajama Set is a great way to make your bed the final frontier. These officially licensed Star Trek Original Series pajamas are 100% cotton and very comfy. You can choose Kirk Gold, Scotty Red, or […]

Let your feet boldly go where they’ve never gone before with these awesomely geeky Officially Licensed Star Trek Socks. I am calling them the coolest and geekiest socks ever. Show your pride in Starfleet on your feet. You don’t get just 1 pair, you get […]

Underneath those Starfleet uniforms, the crew of the U.S.S. Enterprise likes to wear matching undergarments, like these Officially Licensed Star Trek Boxer Briefs. They are comfy after all and probably regulation aboard ship. You get a pack of 3: Gold, Red, and Blue. The Starfleet […]

After a tough day of negotiating peace treaties or battling the Borg, Jean-Luc Picard likes to unwind with a nice cup of Earl Grey tea. He tells the replicator that he wants “Tea, Earl Grey, Hot” and then sits down to relax. Now you can […]

Blue and gold beat red every time when it comes to the adventures of the Starship Enterprise, and the Star Trek Red Shirts T-Shirt provides a not-subtle-at-all clue as to why it’s so hard to find people willing to work as Away-Team security details. In […]

Star Wars fans can rejoice; you can finally take off the Star Wars Good Guys and Star Wars Dark Side T-Shirts and wash them. No you won’t have to go shirtless. GeekAlerts has some other very cool Star Wars T-Shirts you can wear in the […]

With all the great LEGO creations out there, including some of the cool ones GeekAlerts has shown: LEGO Death Star, Maersk Train Set and Tonka Heavy Assault Truck; you are going to need a proper storage space for some of the spare pieces or unfinished […]

The heroes and villains of the Federation and beyond come together for the Star Trek Ships Insignia T-Shirt. Set phasers to fabulous with this 100% cotton tee that features the iconic Star Trek logo made up of the wide variety of ships seen in the […]