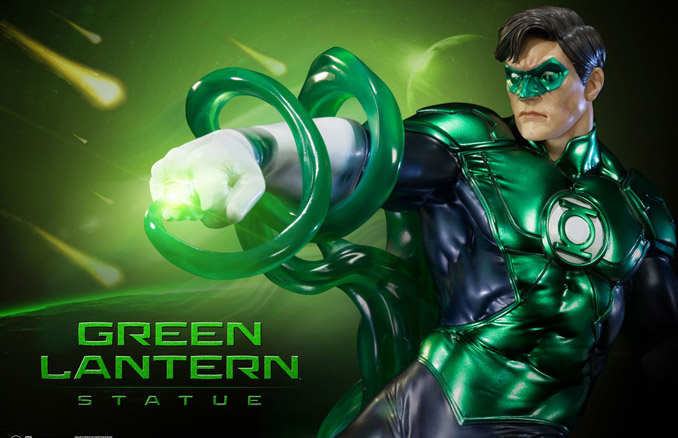 Sure, Marvel latched onto the title and made it official but lets be honest, the Green Lanterns were the first Guardians of the galaxy, and the first human to wield a power ring from Oa is featured here as a 23-inch-tall statue.

With lantern-shaped power battery in hand, Green Lantern uses the force of his will to create a swirling green blob of energy that flows down to the base of the statue, which looks like a tiny portion of landscape from an alien planet, along with a band of silver that features numerous GL logos around it.

If purchased through Sideshow Collectibles, the statue comes with an exclusive alternate portrait that features Green Lantern with a smirk… because New 52 Hal can sometimes be a jerk and get a little full of himself because he has one of the most powerful weapons in the universe on his finger.

In brightest day, in blackest night, no evil shall keep you from finding great deals on Green Lantern goodies at Rout.com.

Hal Jordan shines his emerald light upon you with the Green Lantern Art Print. The DCU is filled with a seemingly limitless number of warriors calling themselves Green Lantern. Heck, Earth alone has at least six people wearing power rings. Still, for many comic book […]

In brightest day, in blackest night, the Limited Edition Green Lantern Life-Size Bust won’t escape your sight, especially if you’re a fan of Hal Jordan. Sometimes it pays to be #2 because the first Green Lantern, Alan Scott, has never enjoyed the same level of […]