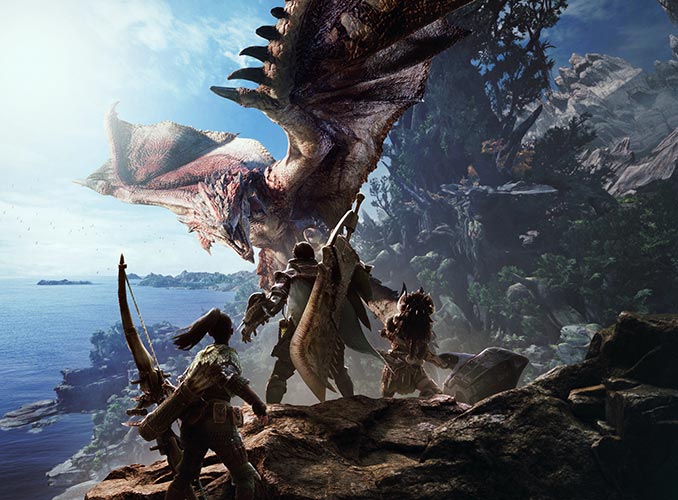 Capcom just announced that Monster Hunter: World will finally be coming to the PC on August 9, 2018 and released a trailer to promote it. It’s already up on Steam, where it will be exclusively available, so you can pre-order it now.

Pre-ordering gives you two exclusive bonuses: Origin Set and Fair Wind Charm. The Origin Set is a full set of armor (head, chest, waist, arms, and legs) that comes with enough defense to carry you through the early quests and also features plenty of skills useful for gathering. The Fair Wind charm carries a skill that increases your attack power and another that adds a chance of reducing the damage you take.

It’s been a while since we’ve talked about the PC version of Monster Hunter: World… but now we finally have some news to share:

First up, let’s answer the big questions, where and when you’ll be able to play the PC version of Monster Hunter: World. It’ll be available on Steam on August 9th.

You can already head over to the Steam page to pre-order your copy, which means you’ll also get the pre-order exclusive Origin Armor Set and Fair Wind Charm.

In Monster Hunter World, you take on the role of a hunter and slay ferocious monsters in a living, breathing ecosystem where you can use the landscape and its diverse inhabitants to get the upper hand. Hunt alone or in co-op with up to three other players, and use materials collected from fallen foes to craft new gear and take on even bigger, badder beasts!

Watch the Monster Hunter World Kulve Taroth Siege Trailer to see what’s in store in the new limited-time game mode that will start April 19, 2018. There is a new monster, the Kulve Taroth, an elder dragon that protects itself with a glittering coat of […]

Nothing’s gonna hold back these determined speedster grannies on walkers. Hold onto your dentures ’cause the Wind-Up Racing Grannies are set to duke it out to the finish line, whether it’s the very last thing they do…

Fans of J.J. Abrams and the monster movie Cloverfield will want to get their hands on this Cloverfield Monster Electronic Action Figure. “Some thing has found us” and it’s eating people! This Cloverfield moster action figure stands 14 inches tall, and is much more massive […]