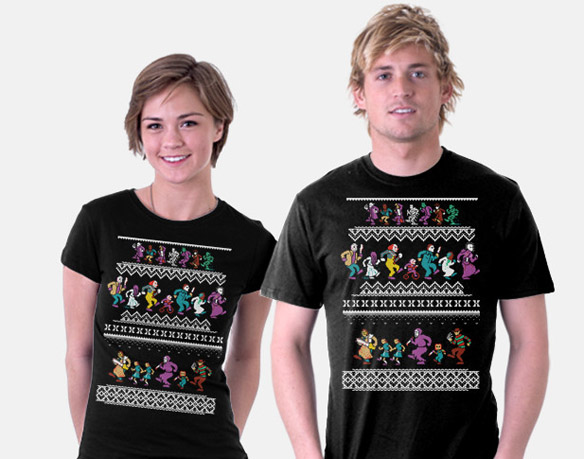 Get into the Christmas spirit, horror-style, with the Monster Holiday Sweater T-Shirt.

It’s sometimes hard for horror fans to express their love for the twisted and macabre during Christmas because of all the visions of sugarplum fairies, flying reindeer, and eggnog being passed around.

However, this tee, styled after the classic ugly Christmas sweater, lets you get your horror groove on with a parade of characters ranging from classics like Nosferatu and the Creature from the Black Lagoon to horror legends like Jason, Freddy, and Leatherface. Even characters with only one film under their belt, like Pennywise the clown and the creepy twins from The Shining, are included. 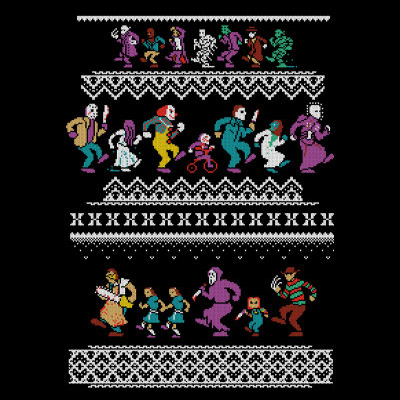 The Monster Holiday Sweater T-Shirt is available for $20 at TeeFury.

Find all the best deals on Christmas Sweaters at Rout.com.

I hope you’re getting ready for this year’s Christmas festivities with an appropriate sweater. GeekAlerts has shown you several just in case you don’t have one; but for those of you that like to squeak by on the bare minimum, this He-Man She-Ra Christmas Faux […]

Knit holiday sweaters; you either love ’em or hate ’em. However, the Cthulhu Christmas Sweater is an atrocity that’s too funny to pass up. The model wearing this sweater is working it in a big way. He is just radiating holiday cheer. He’s like, “Ebenezer […]

A close rival to the Cthulhu Christmas Sweater, the Krampus Sweater is the holiday sweater that adult authority figures might want to wear to remind belligerent kids to shape up, or else… You know it’s the first thing you’ll want to throw on those cold, […]

The Space Invaders Holiday Sweater is a holiday must-wear for Space Invaders fans. This holiday sweater was inspired by the classic arcade game. It will keep you warm and it also includes game and holiday imagery, so it is all win. Pew! Pew! Pew! Go […]

The master of cannibalistic culinary cuisine is captured with the Texas Chainsaw Massacre Leatherface Premium Format Figure. Everything’s bigger in Texas, including chainsaw-wielding maniacs that have a craving for human flesh. Standing 29-inches tall, the face-wearing horror icon known as Leatherface is captured in a […]

Three of the scariest Hollywood villains tear their way off the big screen to fill your yard with nightmares in the form of these Horror Garden Gnomes. Leatherface, Jason, and Freddy want to make sure friends and family have a time to die for when […]

The merc with the mouth is now a Deadpool & Snowflakes Holiday Sweater. Deck the halls with Wade Wilson this holiday season. This “ugly” sweater for both men and women is not ugly at all. Because the holidays are all about the man in the […]

The Pokemon Pikachu Holiday Sweater has a design that includes a winking Pikachu, Pokéballs, and lightning bolts. It is 100% cotton and an amazing sweater to wear during the holidays. Add it to your holiday sweater collection and be one step closer to catching them […]