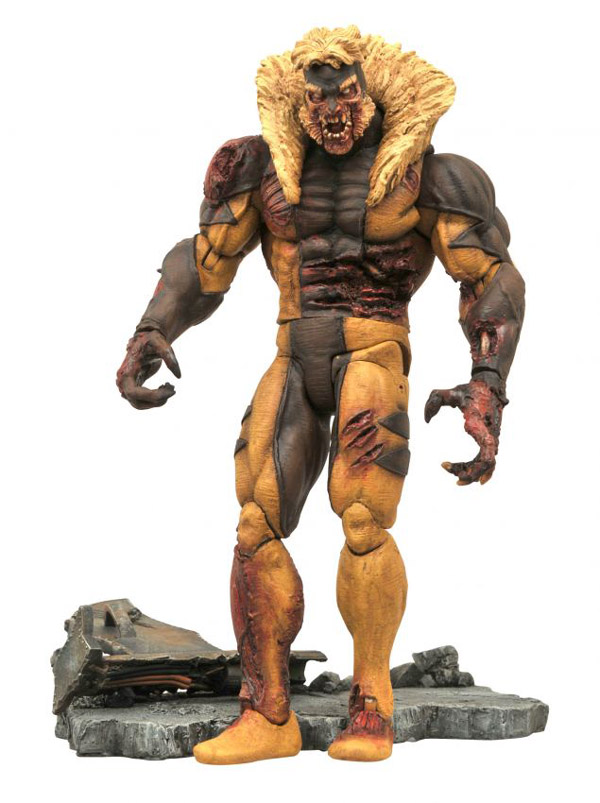 Victor Creed is a hard man to kill but the Marvel Select Zombie Sabretooth Action Figure shows that even he is vulnerable to a bite from the undead.

The blood-thirsty former friend and ally of Wolverine has always had an insatiable hunger for violence but now he also has a hunger for brains. Standing 8-inches-tall, the highly-detailed figure features plenty of battle damage on his zombiefied body. Interesting that a couple of those wounds appear to be have been made by someone who had three claws grouped together on one hand. Maybe Logan got a few hits in before he was turned?

The Marvel Select Zombie Sabretooth Action Figure will be available 2nd Quarter 2015 but it can be pre-ordered now for $22.99 at BigBadToyStore.com.

He’s not green but he’s definitely mean. The Classic Sabretooth Premium Format Figure brings us Victor Creed, the mutant who really needs to see about trimming his nails. Standing 17 1/2-inches tall, this statue delivers Sabretooth as he’s meant to be, and not the messed-up […]

Victor Creed claws his way into Funko’s popular Pop! Vinyl collection with the X-Men Sabretooth Pop! Vinyl Figure. Sometimes he was depicted as Wolverine’s father, sometimes not, but the mutant known as Sabretooth has always been seen as a vicious, heartless killer… except for that […]