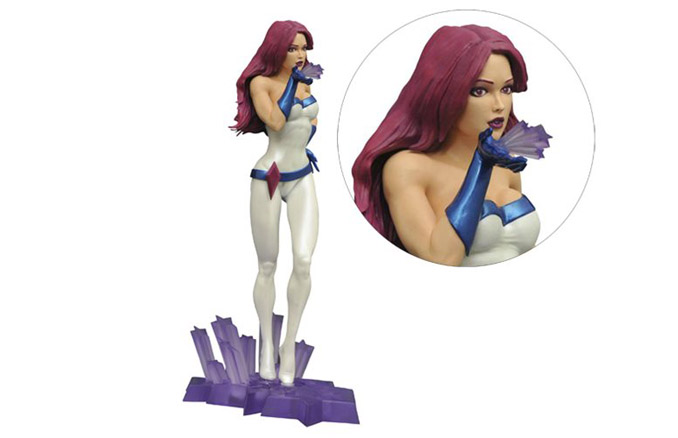 Before Krysten Ritter brought the character to life on Netflix, Jessica Jones was doing the superhero thing in Marvel Comics as the hero known as Jewel. At least she was until she encountered the Purple Man.

Standing 9-inches tall and wearing her iconic white outfit and purple hair, Jessica the superhero blows purple star-filled kisses, not realizing how much she’ll hate the color purple later on.

Long distance relationships are the worst. In my opinion, I think it’s already hard enough to make a relationship work, even when both parties are living just a few miles apart from each other (or zero miles, if you happen to have already moved in […]

Street names get ominous on the Jessica Jones ‘Purple Man’ T-Shirt, with our hero looking over her shoulder, knowing she can’t outrun her past. Main Street, Birch Street, Higgins Drive, Cobalt Lane. Innocent-sounding enough, right? Except from the first moment we hear Jessica utter those […]

Funko delivers a hero who doesn’t think she’s a hero with the Jessica Jones Pop! Vinyl Figure. Standing approximately 3 3/4-inches tall and based on Krysten Ritter’s portrayal of the character in the Netflix series, Jessica Jones is rocking the jeans and leather jacket look, […]