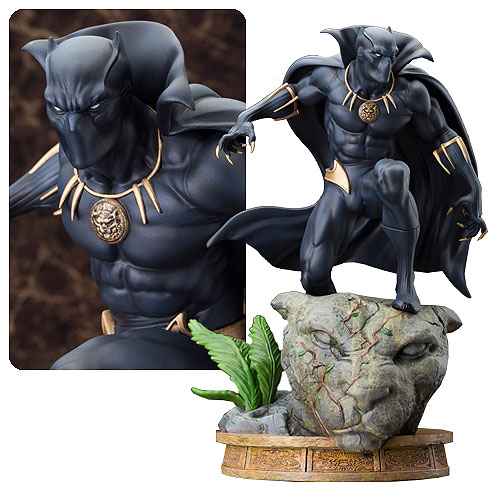 Heir to the centuries-old ruling dynasty of the African kingdom Wakanda, T’Challa whips out the claws on the Marvel Black Panther Fine Art Statue.

Made of resin and measuring about 12-inches tall, the hero known as Black Panther strikes a pose on an ancient panther statue that’s become overgrown with foliage. Dressed in his classic comic book outfit, the lethal warrior wears golden claws, belt, necklace, and feline-inspired armbands, in addition to a cape… because all cool heroes wear capes. Captain America is the exception to that rule. Iron Man is also an exception because he’d look dumb wearing a cape.

The Marvel Black Panther Fine Art Statue will be available June 2016 but it can be pre-ordered now for $239.99 at Entertainment Earth.

T’Challa lends his strength and claws to Team Iron Man with the Captain America Civil War Black Panther Sixth-Scale Figure. The Black Panther makes his big screen debut as the Avengers decide to have a family squabble. Talk about rotten timing. The figure stands 12.20-inches […]

Well the reviews are in and Black Panther is killing it. Rotten Tomatoes has it at 97% on the tomatometer with 279 reviews (270 fresh, only 9 rotten). Slashfilm.com gave it 9 out of 10 and has a nice little review without any spoilers. Black […]

The king of Wakanda strikes an intimidating pose with the Black Panther Polystone Statue. Standing 22.24-inches-tall and based on original movie references from Captain America: Civil War, T’Challa is ready to strike with this highly-detailed statue that features Black Panther wearing his feline-inspired armor, complete […]