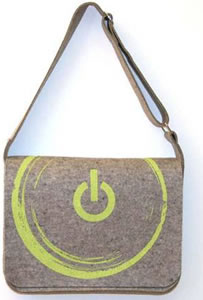 Laptop Tasche On / Off ($106) is a nice looking laptop bag available at the German Cubeseven website. It’s made out of grey felt and has the sign of the On/Off switch for Mac laptops in yellow all over the side.

The Chinese company Thanko has released a new laptop bag that hides a “little” secret. Inside the black bag you find find no less than a desk for you and your precocious computer.

These days thin and light ultrabook laptops are becoming much more popular than the bulky desktop replacements that were en vogue a couple years back.  If you replaced your 17″ notebook with a 13″ ultrabook, it is time you replace your big laptop backback with […]

“The One” Keyboard for iPhone and PC or Mac

Here is a keyboard for everything. Well, at least for your iPhone, PC or Mac. “The One” Keyboard for iPhone and PC or Mac works with any device that supports Bluetooth keyboards. It’s perfect for those who use both a regular computer and their smartphone/tablet […]

Whenever you get the urge to visit the Shire (or anyplace else), you might consider using the Hobbit Bag End Leather Bag to tote essential items like your glow-when-Orcs-are-around sword and that one precious ring. Designed to look like the interior and exterior of the […]

Laptop Case Made of Plywood