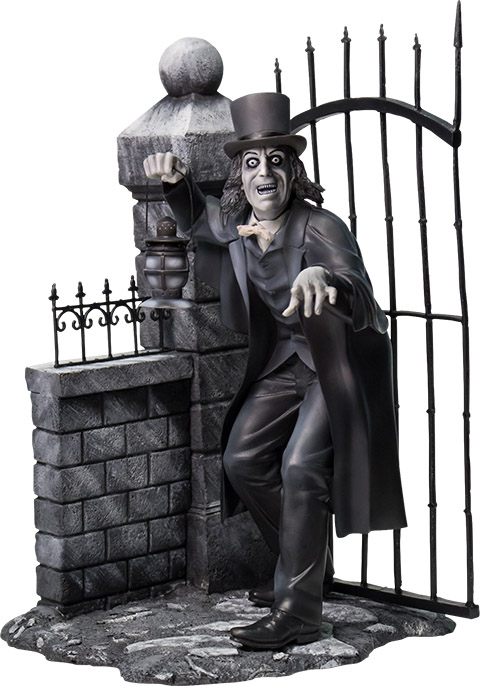 Are you ready to invite the man in the beaver hat over? The Lon Chaney Sr. London After Midnight Statue is perfect for horror freaks and geeks.

Due to a fire in 1967 at MGM, the 1927 silent film, London After Midnight, has been lost to the ages but you can still add Lon Chaney Sr.’s iconic character to your horror collection with this highly-detailed, 13.75-inch-tall statue that features the actor as Inspector Edward C. Burke in disguise as the Man in the Beaver Hat. The statue even comes with a wall and gate environment base to add to the creepiness.

The Lon Chaney Sr. London After Midnight Statue will be available Jul 2016 – Sep 2016 but it can be pre-ordered now for $275 at Sideshow Collectibles.

Doctor Who Daleks In London T-Shirt

The Angels may have the phonebox but the Daleks have the UK on the Doctor Who Daleks In London T-Shirt. Four colorful Daleks are on a mission to exterminate all Whovians in the United Kingdom. Fortunately, the TARDIS has appeared in the sky, which means […]

If you are a Tim Burton fan or just a fan of people with scissors for hands, you are going to love cuddling with this Edward Scissorhands Plush toy. He will keep you company during those cold winter nights when you watch your Tim Burton […]

These sharp and sharp looking Edward Scissors ($11) pair of scissors come with their own clever stand – serving as a nice decoration and making it easy to find your cutting tool when needed. Made out stainless steel and manufactured in Germany.

Are you ready to get your adventure on? First you’ll need to place the Adventure Time Finn Hat on and then you’ll need an imagination…If that doesn’t work out for you, you always have a warm hat to fall back on. Styled after the hat […]

The Cuddle Creeps Horror Pillows are the perfect companions to take your hand and escort you into Dreamland… if you’re a horror freak. After that mess known as Twilight ruined vampires by making them sparkle, there are actually a few people out there who probably […]