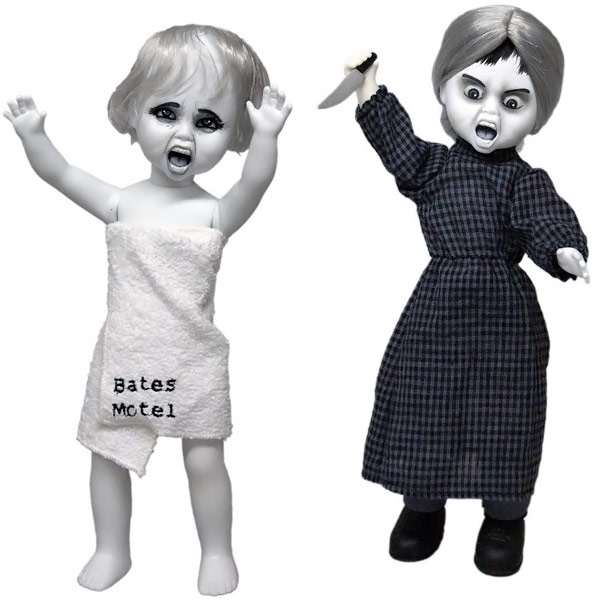 LDD takes on a Hitchcock classic with the Living Dead Dolls Pyscho Norman and Marion Doll Set, featuring two dolls that only a truly devious parent would send their kids to bed with.

Fans of classic horror will want to get their hands on these cute (??) doll versions of gender-confused Norman Bates and Marion, the woman that had the worst luck ever when it came to choosing a hotel to spend the night at.

Norman comes complete with a removable wig and a knife, and he’s wearing pants under the dress just like he did in the movie, because going pantsless while killing someone in the shower is just wrong.

Marion comes with a hotel towel embroidered with the infamous Bates Motel logo.

Each doll is individually packaged in their own window box featuring art from the Oscar-winning film that made many people think twice about stepping into a shower while staying at a strange place.

The Living Dead Dolls Pyscho Norman and Marion Doll Set will be available October 2013, but you can pre-order now for $49.99 at Entertainment Earth.

The peeps behind the Living Dead Doll collection have really lost their head with the Living Dead Dolls Presents Headless Horseman Doll. I guess it was a bad idea to have the company take a vacation in a place called Sleepy Hollow. The 10-inch-tall figure […]