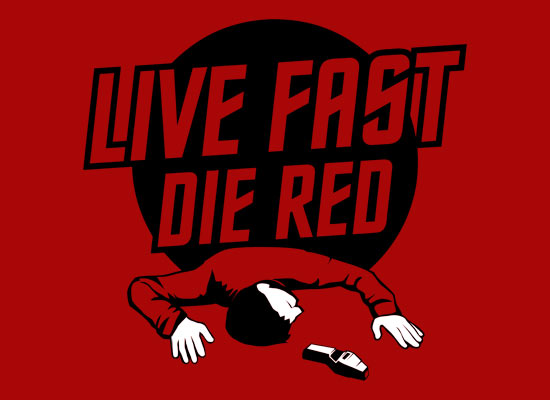 Ya know what I used to love about the classic Star Trek series? It was always easy to tell who NOT to get attached to. Kirk wears gold so he’s alright (Shatner’s acting aside), Spock and Bones wear blue so no problems there, but who is the guy (not Scottie) wearing red? Doesn’t matter because he’s going to die within the next five minutes. Armed with that knowledge, are you brave enough to wear the Live Fast Die Red Shirt?

Impress your friends and intimidate your enemies when you step out of the house wearing this icon of impending doom. It takes a special person to wear this color for more than ten minutes, and you will forever be honored within the sacred Trek halls of bravery for accomplishing such a feat. Of course, the honor will elude you if your name happens to be Scottie because the curse never seemed to affect him. I think it was the massive amounts of Romulan Ale he consumed. He was simply too inebriated to die.

There’s something about dogs and wrist support products. This is actually the third one we cover in a short period of time – first out was the Bone Wrist Support, then the Doggy Ergonomic Armwrist, and now this one that doubles as a keyboard cleaner.

This Spock Trek the Halls Tee is the perfect Christmas shirt for Star Trek fans and fans of festive Vulcans. Spock may look stern-faced in the image, but trust us, he is just enjoying the holiday in his own logical way. He is not a […]

Even the highly logical Mr. Spock isn’t immune to the forthcoming Zombie Apocalypse. Designed by Shanty Shawn, the Live Long and… Brains!! T-Shirt is a trekkies biggest fear…well, that and Captain Kirk suddenly losing his cool. Available at Redbubble, this Star Trek Zombie mash-up is […]

Live long and look cool with the Star Trek Live Long Plaid Back Raglan T-Shirt. In the immortal words of Mr. Spock, nothing beats the logic of plaid. Okay, maybe everyone’s favorite Vulcan didn’t really say that, but only because plaid’s not a thing in […]

Blue and gold beat red every time when it comes to the adventures of the Starship Enterprise, and the Star Trek Red Shirts T-Shirt provides a not-subtle-at-all clue as to why it’s so hard to find people willing to work as Away-Team security details. In […]

Every geek knows about the Vulcan Salute that was popularized by Leonard Nimoy’s character, Spock, on Star Trek some 45 years ago. Many fans still use this salute with their friends today and we even see popular TV Shows like The Big Bang Theory using […]

Stardate: 2016. A select group of Earthlings continue to celebrate a historic television moment and the Star Trek 50th Spock Live Long and Prosper T-Shirt helps commemorate the occasion. Half a century ago (September 8, 1966 to be exact), the televised adventures of Captain Kirk […]

The Fast and the Furious T-Shirt

Car geeks have their Vin Diesel and his Charger. Now The Fast and the Furious T-Shirt gives superhero geeks the truly fast and furious. What’s so special about going fast in a car? Barry Allen can shatter speed records in his tennis shoes, and Oliver […]