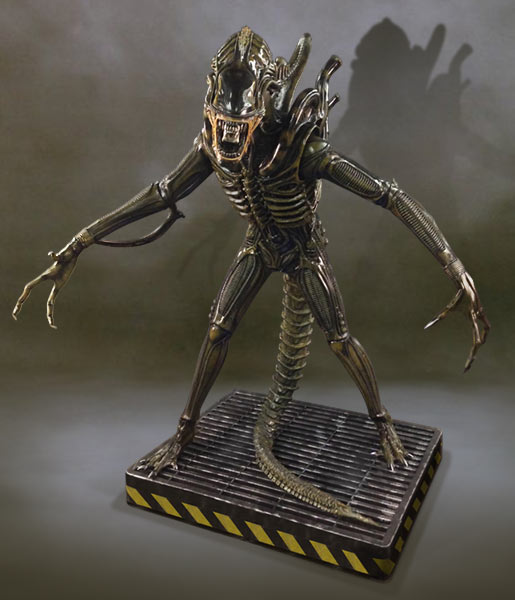 They say nobody can hear you scream in space, and that’s a good thing because the Life-Size Alien Warrior Statue might have you letting loose with a few eardrum-piercing shrieks of joy. Or maybe that’s fear.

Alien fans, this is the Xenomorph you’ve been looking for. Standing just a little over 6-feet tall and made of fiberglass and mixed media, you’ll be keeping an eye out just to make sure this big guy stays put. FYI: If he moves, don’t question it; just run.

Each piece is hand-finished and painted with that wet, glossy look that significantly increases the creepiness. The statue stands on an Aliens-themed, light-up base, and it even has a semi-poseable tail.

The Life-Size Alien Warrior Statue will be available 1st Qtr 2016 but it can be pre-ordered now for $5999.95 at Hollywood Collectibles Group. If you place your order before September 30th, 2015, you’ll get a $500 discount, but let’s be honest. If you can afford this thing, $500 probably isn’t a big deal.

Few things in life are as scary as the aliens from the Alien movie, but this Alien Extreme Warrior Head Knocker is kind of cute. This extreme Warrior bobble head stands 10-inches tall and will happily nod and agree with everything that you say. This […]

Want a prop replica capable of making someone wet themselves? The Alien Warrior Life-Size Head should do the trick. Maybe someone is just excited to see your latest collectible from the Alien movies, or maybe you just literally scared the pee out of them. Either […]

In space, nobody can hear you scream when you see this Alien Warrior Sixth-Scale Figure. It’s awesome. It’s scary. It’s awesomely scary. Based on the Xenomorphs that terrorize Ripley and the Marines in Aliens, this figure stands 13.77-inches tall and features specially applied blueish colored […]

This Aliens 18-Inch Alien Warrior Action Figure is not only scary, but huge. He is ready to jump out from your collection in the dark and scare you to death. This figure is inspired by Kenner’s 1979 Alien monster figure. It has double-jaws and a […]

The First Order has relaxed the dress code, judging from the looks of the Lonely Warrior Tomorrow Queen Stormtrooper. I hope she has better aim than the regular Stormtroopers because this warrior isn’t dressed to take too much blaster fire, and as far as evading […]

The Alien 3 Dog Alien ArtFX+ Statue will give you nightmares. It is based on the Xenomorph first seen in Alien 3. Your Alien collection is not complete without this ferocious mutt. It is sculpted based on the appearance of the Dog Alien, also called […]