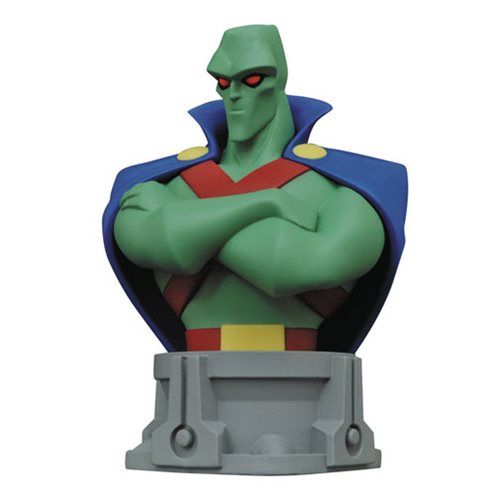 Martian Manhunter is posed with his arms crossed on top of a pedestal base inspired but the League’s Watchtower satellite. It is a limited edition of 3,000 pieces and comes packaged in a numbered box along with a numbered certificate of authenticity.

Only $49.99 from Entertainment Earth. Pre-order it now for March.

The DC Superhero Best Of Martian Manhunter Figure with Collector Magazine #30 celebrates DC’s favorite Martian. This 1:21 scale figurine comes with a 16-page booklet detailing the character’s history. It is cast in metallic resin and hand painted. It features Martian Manhunter posed in his […]

Get ready for some out-of-this-world retro fun with the My Favorite Martian Shakems Premium Motion Statue Collection. Back in 1963, a martian crash-landed on Earth and immediately got sucked into a wide assortment of laughable situations with newspaper reporter Tim O’Hara. Doing his best to […]

This Batman: The Animated Series Batgirl Bust is cute and full of attitude. This bust of Barbara Gordon’s alter ego captures Batgirl as she appeared in the early seasons of the animated series. It measures about 5-inches tall and sits on top of a pedestal […]