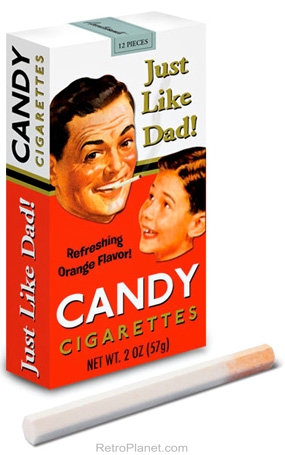 Got a husband (or dad) who just won’t quit smoking, no matter how you beg and plead with him to stop? Then it’s time to use the dirtiest trick in the book: his kids. Simply let his sons (or daughters) in on the plan and hand them a box of these Just Like Dad Candy Cigarettes to get things rolling. Make sure they carry around the box in plain sight, too.

Once good old dad sees what a bad influence he’s being to his kids (and how much damage he’s doing to his health), he’ll give up his bad habit in no time. He probably won’t appreciate it when you ‘fess up and tell him that his kids aren’t really smoking but just chewing on some candy. But hopefully, he’ll get the message.

The Just Like Dad Candy Cigarettes are available from Retro Planet for $2.39 a box.

If you know a chain smoker and want him (or her) to quit or at least start rethinking his (or her) lifestyle choices, then all you will need are these Gum Cigarettes and a willing minor, preferable his (or her) child, to play along. The […]

Are you trying to quit smoking? Finding it too difficult to achieve with just using those nicotine patches? Then maybe you should give the Blu Electric Cigarettes a try to help you transition through the big change.

Make Your Own Chewing Gum Kit

Create your own chewing gum from scratch using the Make Your Own Chewing Gum Kit. Prepare the gum base by heating it, and then mix in the sugar and flavorings. With this kit you make your gum from natural chicle, the sap of the Sapodilla […]

If you’ve already exhausted all your projects from the Star Wars Craft Book, maybe you need a fresh go-to vault of project ideas to share with your kids. Show them how cool and smart a dad you really are when you delight them with activities in The Geek […]

Tell dad you care this father’s day with the Tactical DAD Apron. If your dad loves to grill, he will love this apron. It has a real MOLLE system for holding everything a Grill Master needs. Why grill with a regular apron when you can […]