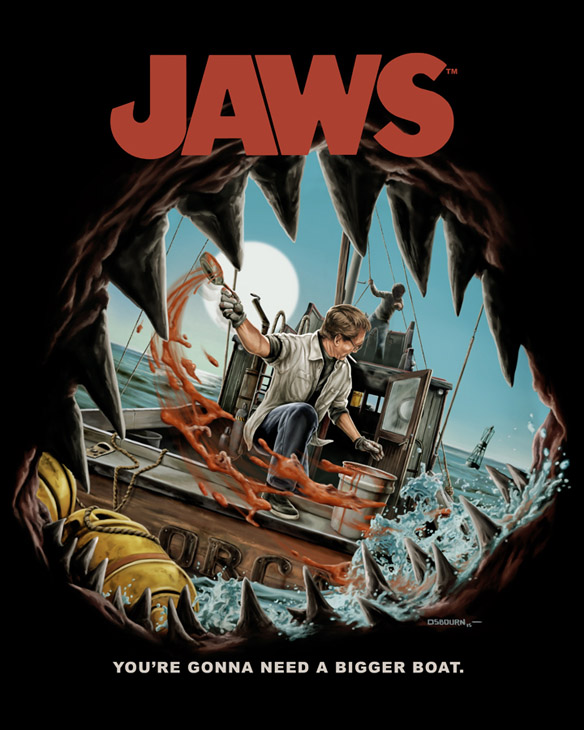 You wouldn’t expect a film about a shark munching on people to have much humor but the JAWS Chum Bucket T-Shirt captures one of those light-hearted moments.

Before there was Sharknado, there was JAWS, which told the heart-warming story about a poor Great White Shark doing his best to avoid starving by munching on anyone foolish enough to get in the water. One of those poor fools was Chief Brody… and he was doing it because it was his job so go easy on the guy.

That moment Brody gets his first look at their adversary is when he’s serving up chum (yum) and the shark surfaces to see if they have any ketchup. Brody is understandably startled and utters the now-classic line, ‘You’re gonna need a bigger boat.’

Admittedly, the moment does lose a little humor when it seems like you’re watching the scene unfold from inside the shark, but what you lose in funny you gain back in awesome. 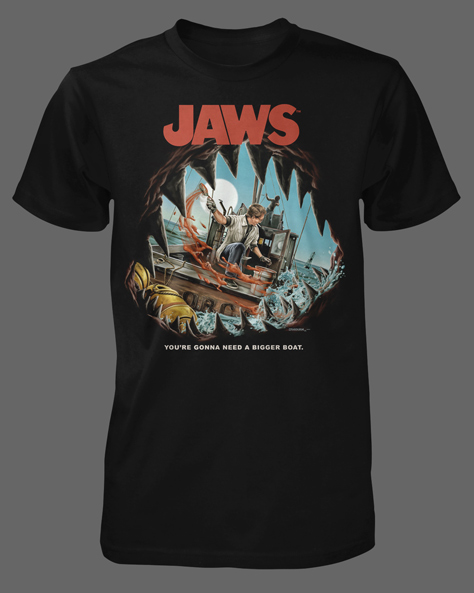 The JAWS Chum Bucket T-Shirt is available for $27 at Fright Rags.

It’s not the Fourth of July but it’s never a bad time to celebrate the movie that traumatized a whole generation. The Jaws We’re Gonna Need A Bigger Bow T-Shirt lets you get into the Christmas spirit while wearing a Great White Shark on your […]

A classic horror movie provides wearable quotes with the JAWS Quote T-Shirts. When you think of Steven Spielberg’s ‘Jaws,’ you probably think of that classic, and oddly amusing, line, ‘You’re gonna need a bigger boat.’ However, the classic film has many other quotable lines that […]

Sheriff Brody told him they needed a bigger boat and the Jaws Bloody Quint and Shark ReAction Figure shows what happens when a know-it-all fisherman doesn’t listen. Ol’ Quint was the definition of stubborn but he was also the definition of tough, and he didn’t […]

Be a land shark this Halloween thanks to the very first Jaws Officially Licensed Bruce the Shark Mask. As you can see, an oxygen tank and Quint’s hand protrude from the mouth. You are going to scare people silly with this mask. It has foam […]

Can’t get enough of beverage related gadgets and remote controls, like the R/C Cooler and the Remote Control and Drink Holder? You might want to take a closer look at this ice bucket.

Can you hear the Jaws theme? Uh-oh. We’re going to need a bigger bottle opener. This Jaws Bruce Shark Stainless Steel Bottle Opener is perfect for fans of the classic shark attack movie. You may never go into the water again, but you will keep […]

Are you into Skulls? Do you need an ice bucket to complement your Doomed Crystal Skull Shot Glasses and Skull Pint Glasses? If so, the Brainfreeze – Glass Skull Ice Bucket should be perfect for you. Made from thick, crystal cut glass and molded to […]

Just when you thought it was safe to eat sushi, the Jaws Shark Sushi Plate comes swimming into your life. The shark is showing off some impressive chompers but you’ll be the one doing the eating this time. Measuring 12.5″ X 6″, with a 4-inch-tall […]

Your pad is party central and everyone enjoys getting down with their bad selves at your hedonistic hacienda, but maybe the disco ball and strobe lights have outlived their welcome. Update your den of revelry with the LED Sound Sensitive Ice Bucket. Watch the groovy […]

The Jaws Bruce Shark Deluxe Bobble Head lets you decorate your desk with the original terror from the deep, the creature that made you scared to go in the water long before Sharknado turned Great White sharks into an aerial menace. Measuring 7 1/2-inches long […]