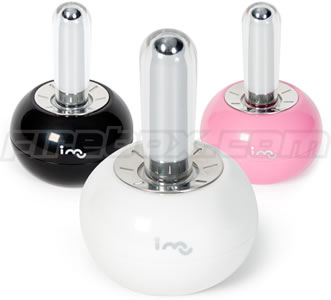 The I-MU Vibro Speakers ($100) might have a somewhat kinky name and design, but they (also) have quite a cool feature.

Stick it on your desk, fridge, car bonnet, or pretty much whatever, and they will turn the surface into a high quality audio speaker (Output power: 30w).

The main component is a tiny piece of a material called Terfenol-D, which was originally used by the US Navy for sonar work. The Terfenol is placed within an aluminium case and a coil wrapped round it. When electricity is passed through the coil the Terfenol expands slightly creating a massive force of 400 pounds – when its attached to a flat surface it transmits electronic signals into mechanical energy causing the flat surface to vibrate and broadcasts the sound.

These speakers are officially described as bullet-like, which is probably a fair description. It won’t stop others from referring to them as something other than bullets though. USB Bullet-like LED Speaker allows you to enjoy the fantastic music!! Its dual speaker design offers a […]

The tinyTesla oneTeslaTS MegaTesla Kit is a kit that lets you make your own Tesla coil. Tesla would be thrilled to know that everyone can have one today. This is the perfect gift for the experienced maker. It shoots 20″ sparks and obviously looks super […]

If you have read through the 10 USB Gadgets to Help You Through the Winter post, but still haven’t been able to find to find the right type of gadget to keep your hands warm, maybe this kinky looking USB stick is just what you’ve […]