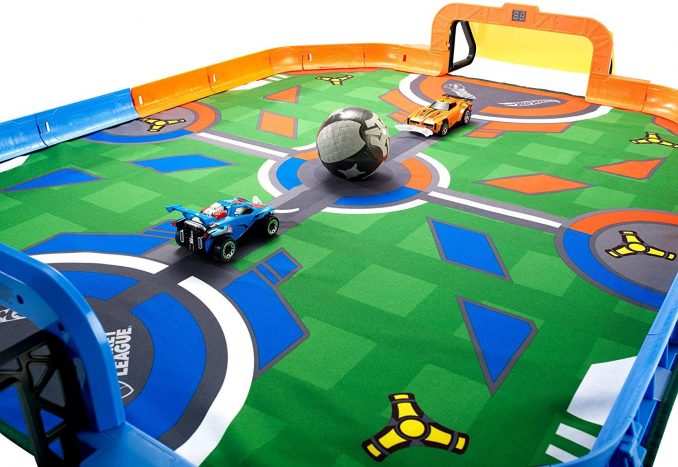 Fans of the wildly popular video game Rocket League now have the chance to bring the adrenaline-fueled action to life with this Hot Wheels Rocket League RC Rivals Set.

With this set, players control RC vehicles with their Apple or Android device as they battle in a high-tech arena. It includes Octane and Dominus, and they’re tricked out with LED thrust indicators and vehicle bumpers with clip-in push bars for ball handling. Like in the video game, the goal in Hot Wheels Rocket League RC Rivals is to smash the giant ball into the goal and rack up the most points before time runs out.

Included is a master charging station, to juice up the cars’ LIPO rechargeable batteries. This set also comes with awesome Rocket League downloadable content (DLC) that players can redeem in the video game.

The Hot Wheels Rocket League Rivals RC Set is built for the ultimate Rocket League fan – bring authentic competition of the popular video game to life with a “Smart” Arena that comes with infrared sensor goals to keep score, along with fan-favorite vehicles Dominus and Octane, controlled by your smart device. The Rivals RC Set also comes with awesome Rocket League downloadable content (DLC) that players can redeem in-game on the platform of their choice. (Rocket League game sold separately.)

Hot Wheels Rocket League RC Rivals Set is $150 at Walmart.com. You can also buy it at Target or Amazon.

I remember a tradition that my dad and I used to have back when I was much younger. Every Sunday night, we’d sit at the table and play a round of dominoes after dinner. It was a fun way to bond and I enjoyed playing […]

The Hot Wheels UNO Card Game lets you enjoy classic UNO fun mixed with cool Hot Wheels cars. The usual UNO rules apply, but there is a special rule and 4 corresponding action cards. Fans of Hot Wheels will love the cars featured on the […]